A Struggle over Tombstones and Grave Markers

Families of political prisoners executed in August 1988 in Sanandaj found a mass grave on the borders of Qorveh, in arid land next to Golestan Javid (The Baha’i Cemetery). According to witnesses interviewed by JFI, the judicial authorities who informed them their children had been executed refused to give any information about the location of their graves. Later, local sources told the families that corpses had been buried in the desert around Qorveh. Upon visiting the location, the families realised that over twenty political prisoners, male and female, were buried there in mass graves. They exhumed the corpses, including those of their relatives, and buried them in individual graves at night. 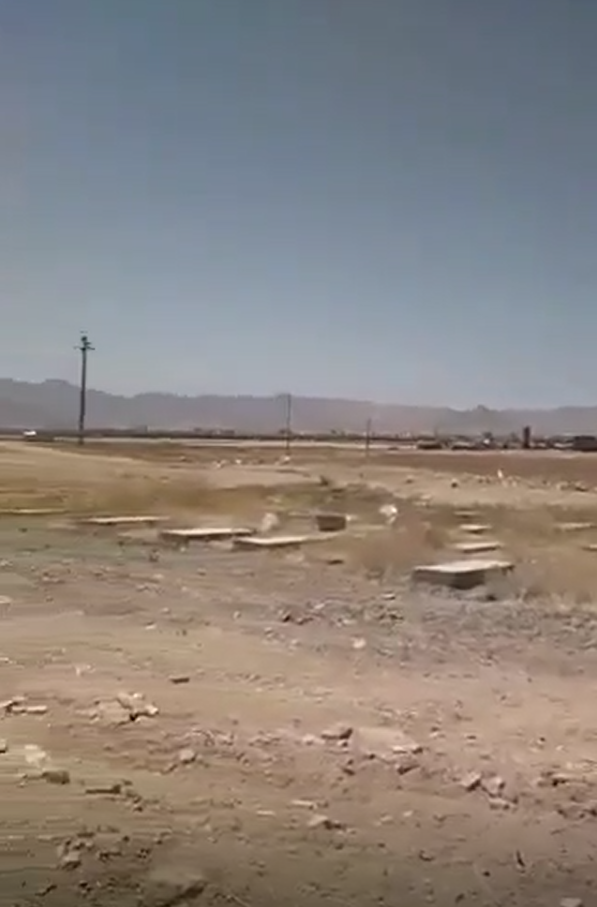 A view of political prisoners’ grave at the border of Baha’is Cemetery in Qorveh, before it was destroyed in 2016

Abdollah Seyed Moradi, whose brothers Jabbar and Kamal Seyed Moradi were executed in Sanandaj in 1988, quotes his mother describing how this mass grave was discovered:

“Almost one month after the announcement of the executions, the families were informed that in some villages large ditches had been dug by bulldozers and tractors, and the bodies of the executed prisoners could probably be found there. They searched some villages, but failed to find the bodies.

“One day, early in the morning, some families took taxis and headed to Qorveh. Near Qorveh, they reached a deserted, arid area. They looked for trenches dug in the ground and freshly disturbed soil, but found nothing.

“After a while a villager appeared, approached them and realised they were looking for something. The families were frightened. The villager said he knew what they wanted, and asked them to tell him their intentions. They said their children had been executed and they wanted to find their bodies. The man told them that a ditch had been dug recently nearby, and asked them to go with him. He said he knew what had happened, and had seen clothes sticking out of the ground. The families had no tools for digging, but the villager had a couple of shovels.

“They found the grave. Some of the mothers fainted, but when they recovered they helped get all the corpses out of the ditch. My mother was able to identify many corpses. One was from Sardasht, another from Kamyaran, another from Sanandaj. The corpse of my brother, Kamal, was among them. They took out all the bodies, and my mother identified all of them… It was my mother who recognised Kamal’s body, even though she said she was not sure at first. She finally identified him by a mole my brother had.

“They took out the bodies and tried to dig the hole deeper so the corpses could be covered by earth. They reburied the bodies separately and covered them with soil, then returned home. Over twenty male and female Peshmerga of the Komala party, and five or six other political prisoners in Sanandaj were buried in mass graves there. However, the bodies of other prisoners, including my other brother Jabbar Seyed Moradi, were never found. My mother could not find him among the corpses. We have not found Jabbar’s body yet.”

Khaled Alipanah, a Kurdish political activist, interviewed the brother of Shahla Kolahghouchi. Kolahghouchi was a member of the Komala Showan battalion, and was executed in August 1988 with her husband, Hooshang Zandi and nine other members of the Showan battalion. They were all arrested in March 1988 by the military forces of the Islamic Republic of Iran. His testimony follows:

“It takes two hours by car from Sanandaj to Qorveh. They went there, found freshly dug graves and saw the corpses. Each could identify his or her own loved one. Shahla Kolahghouchi’s brother related that they had gone there early in the morning at 4 am, before people woke up. They got to the trenches of those recently executed and dug up the graves. They could find their son-in-law, Shahla’s brother or Shahla herself. After finding all the corpses, they paid someone to dig some more graves, and buried the bodies there.”

During the 1980s and especially in 1988, hundreds of political prisoners, mostly supporters or members of Komala and the Democratic Party of Kurdistan, were executed in cities across Kurdistan Province. There is no record that the bodies of executed prisoners were returned to their families. Beside the group of 20 mentioned above, other executed political prisoners were also probably buried in mass graves at this location, but their graves have not yet been discovered.

The tombstones and the markers, put in this place by the victims’ families, have been repeatedly damaged by the authorities. The families always replace the damaged markers with new tombstones. They come individually or as a group, particularly in the last week of the year, which coincides with the Halabja chemical attack, and commemorate their loved ones.

Aref Naderi, the Kurdish political activist and former member of the city council of Qorveh, said:

“Many of the families did not know the exact place of their child’s grave. However, as more visitors started to come with the lessening of repression at the end of the 1990s, people realised this place wasn’t simply the Baha’i Cemetery, but also contained the mass or individual graves of many Peshmergas, political activists and those executed in the 1980s.”

The video showing the place before destruction

On 14 July 2016, this mass grave was bulldozed to the ground in accordance with the orders of the judicial authorities under the guise of “Application Change.” According to reports, the area of the Baha’i Cemetery in Qorveh and the surrounding land including the area containing the graves of political prisoners of the 1980s all belonged to an 80-year-old Baha’i, Khalil Eqdamian. Qorveh’s Department of Agriculture filed a complaint against him, citing the construction of a small building used as a mortuary, as well as burials in this area, charging Eqdamian with changing the use of agricultural land. The Judiciary ordered the destruction of all buildings in the area. However, in this process of destruction, Baha’i graves remained intact while trees, the mortuary, the tombstones and everything in the field around the graves of the political prisoners were bulldozed to the ground.

See more: And all the trees faded away…

This picture shows the area lodging the graves of political prisoners in Qorveh, which has been totally destroyed. A notice set up there at the time read: “Pursuant to the judicial order, the buildings in this estate were destroyed. The proprietor(s) may refer to the Department of Agriculture of the city to follow up this case.”

A Baha’i citizen of Qorveh, in an interview with Nowrooz TV channel broadcast at that time said:

An eyewitness said: “Yesterday when I went to Golestan-e Javid, I found the cemetery leveled, and the mortuary, heating installations, conference halls, coffins and graves including those of Kurds who were buried in this cemetery all destroyed and bulldozed. Nearly 300 twenty-year-old trees were cut down, and even the pine trees next to my mother’s grave were uprooted.”

The Center for Democracy and Human Rights of Kurdistan reported that families whose relatives were buried in this cemetery went to the Department of Agriculture and to the Provincial Government. This report asserts that the complaint raised by the relatives of Komala members, Democratic Party members and Baha’is over the destruction of this cemetery without properly notifying them and the cemetery’s owner went unanswered, because they were told: “Mr. Khalil Eqdamian, the proprietor, is the sole individual entitled to file a complaint in this regard.”

However, on the day the cemetery was leveled, the proprietor Khalil Eqdamian received a summon from the Public and Revolutionary Court of Qorveh, giving him a three-day deadline to appear before the court and defend himself against the complaint brought against him by the Department of Agriculture.

On 17 July 2016, Behnam Eqdamian, the proprietor’s son, wrote on his Facebook page:

“Today, 17 July 2016, after recent events, my father accompanied by Kamran and Tayeb Salehi, went to the tribunal. They placed him in custody and asked for bail to secure his release.

“Now my eighty year old father is in detention because he is accused! It is a shame!”

“Father has been released on bail, and we are still following up the case.”

Satellite pictures confirm the destruction of this cemetery.

In this photo, taken by the Google Earth on 1 June 2014, the trees around the cemetery, the roof of a building, and the tombstones are fully visible.

In the second photo, taken by the Google Earth from the same place on October 3, 2016, there is no trace of the buildings, trees and tombstones.

After the destruction of this place in 2016, the families installed new tombstones on the graves. According to some families, the authorities destroyed all the tombstones in 2017 and removed them. They have also placed a panel on the main road leading to this cemetery which reads: La’nat abad (the Damned land). The struggle between the families and government agents over the tombstones continues.

The most recent photo available, from Google Earth on 17 November 2017