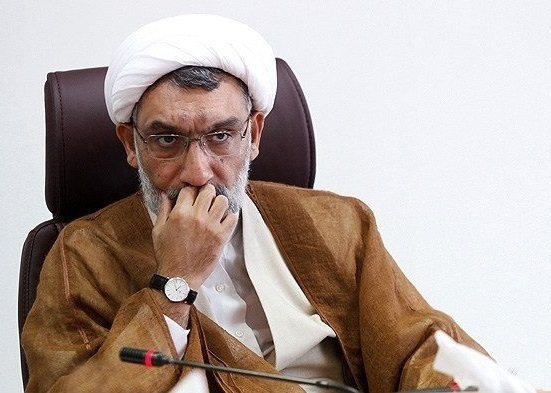 Mostafa Pourmohammadi was born in 1959, in Qom, [Iran].  He completed his seminary education in Qom, Mashhad, and Tehran.  He was educated in Islamic jurisprudence, principles of jurisprudence, and philosophy, at [an equivalent] Ph.D. level.  Pourmohammadi is married and has four children.

August 2013 to present, minister of justice, cabinet member in the 11th Majlis;

From 2002, head of the political and social affairs at the office of the Supreme Leader (one of the mandates of this office was to familiarise the general public with the fatwas of Rohollah Khomeini and Seyyed Ali Khamenei; as well to respond to questions pertaining Islam and Sharia experientially and with ease, especially to Muslims outside the country);

1991 to 1999, chief of foreign directorate at the ministry of intelligence;

From 1990, deputy minister of intelligence;

From 1986, prosecutor for the Armed Forces Revolutionary Court in the western regions;[2]

From 1979 to 1986, chief prosecutor at the Revolutionary Courts in Bandar Abbas, Kermanshah and Mashhad.[3]

Having held sensitive and key security/intelligence positions from the early years of the Islamic revolution, Mostafa Pourmohammadi played a role in widespread and systematic repression of those opposed to the Islamic Republic.

As a prosecutor during the early years of the Islamic revolution, Pourmohammadi was involved in violations of human rights during extrajudicial murders of political prisoners and oppositions to the Islamic Republic of Iran.  Due to his key positions at the ministry of intelligence, particularly in the foreign affairs’ office of that ministry, he had direct involvement in extrajudicial murders of the intellectuals, as well as assassination and physical removal of opposition leaders.

In late July 1981, Mostafa Pourmohammadi came to Mashhad from Bandar Abbas to assume a position as the chief prosecutor in the Province of Khurasan.  At the same time, Ali Razini was posted as the religious magistrate of the Revolutionary Courts in that city.  Prisoners recall in their testimonies that with the new combination taking charge of the Revolutionary prosecutor’s office in early September 1981, a wave of executions of political prisoners began.

Towards the end of December 1981, a number of young girls were executed in Mashhad’s Vakilabad Prison.  According to official statistics, on December 22 and 23 alone, respectively four and six young female Mujahedeen supporters were executed.  Immediately after these executions, some members of the families of the young girls confided in close friends and relatives that prior to execution, their daughters had been raped.  Evidence gathered by Justice for Iran from close friends of three of such girls:  Sima Matlabi, Mandana and Mitra Mojaverian, indicates that they were sentenced to executions in trials which lasted a few short minutes, and without having rights to legal representation.  With respect to Mandana and Mitra Mojaverian, a few days after the news of their execution, a prison guard (a Pasdar), visited the home of the mourning family and by offering flowers and sweets announced that brother Pasdars had ‘married’ these girls prior to their execution.  Sima Matlabi wrote on her leg that she had been raped.[4]

The news of rape prior to execution was thus widely spread among political prisoners and their families in Mashhad.   According to testimonies of two political prisoners who were tried in September and December 1981 respectively, from September to December inclusive, all execution orders of young girls were issued by Hojjatoleslam Ali Razini, the religious magistrate at the time,[5] and supervised by Hojjatoleslam Pourmohammadi, the Provincial Revolutionary prosecutor.

Ayatollah Montazeri, the sole successor to Ayatollah Khomeini, and a point of imitation who turned against the regime, referred to Pourmohammadi as one with a significant role in mass murders of the political prisoners in Tehran in 1988.  As the official representative of the Ministry of Intelligence, Pourmohammadi was a member of a three-man committee, who, after a brief questioning of the political or religious prisoners about their ideology, decided whether they would live or die.  In July and August 1988, through a fatwa issued by Khomeini, and the decision of the judiciary and the ministry of intelligence, over 5000 Iranian political prisoners were executed, all of whom were serving their prison sentence, or had even finished their term.

About a meeting with Pourmohammadi and two other members of the committee, Ayatollah Montazeri notes:  “After my second letter of objection to Ayatollah Khomeini, there were no changes, and the executions continued.  On 15 August 1988, I met with Nayyeri, religious magistrate in Evin, Eshraghi, prosecutor, and Pourmohammadi, the representative of the ministry of intelligence.  I asked them to stop the executions during the month of Muharram.  Mr. Nayyeri said:  “So far we have executed 750 people in Tehran, and have identified 250 more.  Allow us to get rid of these and we shall then honour your recommendation.”[6]

Amir Atyabi, former political prisoner recalls that when he was in Gohardasht Prison in Karaj he had seen a clergyman whom he later learned to be Pourmohammadi.  Atyabi remembers having seen the said clergyman with Hossein Ali (Jafar) Nayyeri, and Eshraghi, who were appointed by Ayatollah Khomeini as the members of the death committee.  Atyabi recalls that Pourmohammadi had told him that given that the (Iran/Iraq) war was over, the government of the Islamic Republic wants to identify the prisoners who were eligible to be released.

Mehdi Aslani, who was imprisoned in 1983 for membership in Fadaian-e Khalq, a leftist political opposition group in Iran, was called before the death committee twice in 1988.  Members of this committee were Nayyeri, Eshraqi, Pourmohammadi, and Naserian (Mohammad Moqiseh).

Assassination of dissidents outside Iran

During Pourmohammadi’s post as deputy minister at the ministry of intelligence, and his subsequent role as chief of foreign directorate at that ministry, authorities of the ministry were involved in planning and ordering the assassination of a number of Islamic Republic opposition leaders in Europe, including Abdolrahman Qasemlou (1989), Shapour Bakhtiar (1991), and Sadeq Sharafkandi (1992).[7]

Murder of writers, intellectuals, and political dissidents (the Chain Murders)

In November 1998, a number of notable Iranian political objectors, writers and intellectuals were murdered in a short span of time.

Dariush and Parvaneh Forouhar, were longstanding political activists and leaders of the Hezb-e Melat-e Iran, Iran Nation Party (INP), since 1951.  Majid Sharif, Mohammad Mokhtari, and Jaffar Pouyandeh, were notable intellectual authors and journalists.  These murders in Iran are known as ‘chain murders.’  As a result of public pressure and by the instruction of then president, Mohammad Khatami, in a public declaration on …. , the ministry of intelligence admitted that the ministry’s authorities were involved in planning these murders.  However, the ministry assumed a position that “those who carried out such murders were a few low-ranked, hard-headed and adverse individuals who no doubt carried out such heinous acts as instruments of secret forces at the behest of foreign enemies.” [8] Eighteen individuals were arrested for involvement in such murders, and, ultimately, the prosecutor of the Armed Forces Judicial Complex announced that the mastermind behind the chain murders was one of the top ranking authorities at the ministry of intelligence by the name of Saeed Emami, who committed suicide in prison.

At the time of the chain murders, Mostafa Pourmohammadi was the deputy to the minister of intelligence, Ghorbanali Dorri Najafabadi.

Families of victims who were executed in the early years of the Islamic revolution, survivors and witnesses of the extrajudicial killings, civil organisations, and international human rights organisations have voiced their objections through open letters and manifestos and have demanded immediate removal of Pourmohammadi, due to his blatant and multi-layered involvement in violation of human rights over the years.

[1] It should be noted that the ministry of intelligence is responsible for national security, both foreign and domestic, and that it is comprised of 15 departments, including:  security, foreign affairs, intelligence, technology, and so on.

[2] There is no evidence as to Pourmohammadi’s official or de jure appointment to this position; however, he has assumed this position de facto.  http://www.hrw.org/legacy/backgrounder/mena/iran1205/iran1205_farsi.pdf

[4] For more information regarding rape of virgin prisoners before execution, and the events of the second half of 1981 in Mashhad, please see:  Justice for Iran, Crimes without Punishment, Dec. 2012, pp 37-60 at http://justiceforiran.org/wp-content/uploads/2012/05/Crime-without-Aida-final22.pdf ,  as well as the documentary entitled “last seconds” at http://www.youtube.com/watch?v=ZyXasfj-ihk