On the road from Ahwaz to Mahshahr, in the vicinity of Imamzadeh Seyed Amir shrine, beside the Darvish Educational Centre of the Iran Police Force (NAJA), there are two cement structures where some of the prisoners executed in Ahwaz during the 1988 massacre are buried.

According to reports from families and former political prisoners, over 20 bodies were buried there in mass graves. The bodies belonged to those detained in Karoun prison in Ahwaz. Most of them were not from Ahwaz.

According to the writings of Abbas Bakhtiary, a former political prisoner, 30 individuals executed in Karoun prison were buried in mass or individual graves in this area. The prisoners had been transferred to the Darvishi Base and were executed there by firing squad overnight during the summer of 1988. The Darvishi Base belonged to the Islamic Revolutionary Guard Corps (IRGC) and has now become NAJA’s Darvish Educational Centre.

Bakhtiary has identified five of the executed prisoners as Bahram Kargarfar, Shapour Tavakoli, Azim Mohammadzadeh Rezaei, Siavash Salehizadeh and Shapour Layeq. All were supporters of the People’s Mojahedin Organisation except for Bahram Kargarfar who was a Marxist unaffiliated with any organisation. 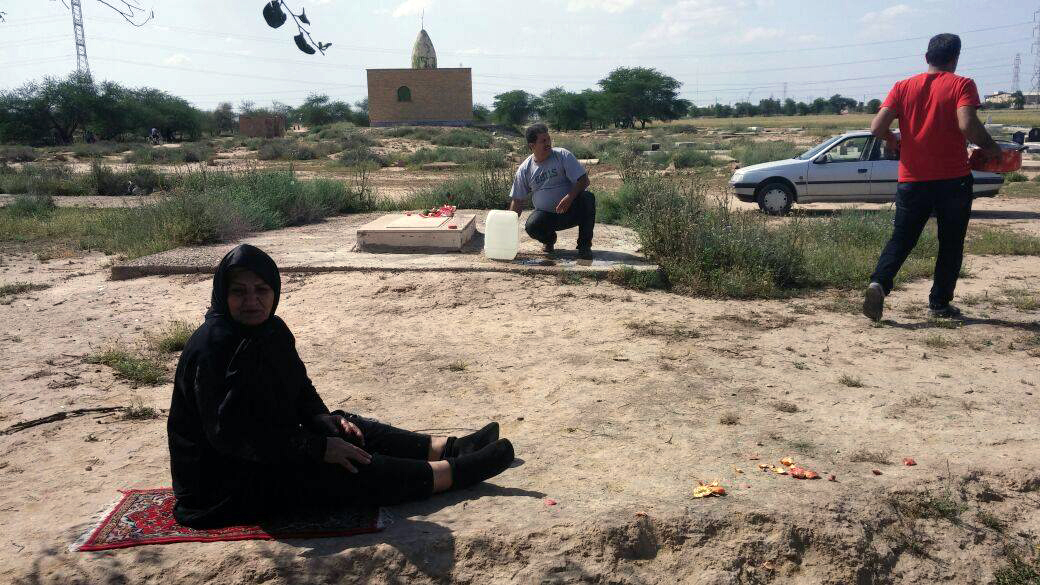 A prisoner who survived the 1988 massacre in Ahwaz told “Bidaran” website:

“As far as I know, families were not officially informed of the burial places of their children. However, they know where they are buried. They are buried in deserts.

It was a few years after my release that I happened to see the mother of Azim Mohammadzadeh Rezaei on a bus heading to Ahwaz. I was a peddler at that time. I bought goods from Ahwaz and sold them in Mahshahr. I noticed Azim’s mother going to get off before reaching Ahwaz, in a land that was almost desert. She carried a water container and said she was going to wash Azim’s grave. ‘Is your son’s grave here?’ I asked in surprise. ‘They have said it is here,’ she replied. ‘I think they have buried all of them in a mass grave.’”

Mehri Alghaspour, a former inmate at Ahwaz’s Fajr Prison, believes a young woman named Fatemeh Hajian is buried in an individual grave next to the mass graves in this area. Alghaspour who was in detention until 1990 on the charge of supporting the Fedaian Khalq Guerilla Organisation (Minority) and survived the 1988 massacre in Ahwaz prison says:

“I saw Fatemeh Hajian in 1987 when she was in her early twenties. She worked hard and supported her family by sewing. The family was war-stricken and had moved to Shiraz. I remember she had only one visit during her detention and it was from her mother. However, she was very unhappy on that occasion to see that her mother, on such a low income, had to spend her money travelling from Shiraz to Ahwaz to visit her.”

Before the mass executions of Mojahedin prisoners at Fajr prison in Ahwaz, Fatemeh Hajian, though charged with supporting the People’s Mojahedin Organisation, was mistakenly or intentionally transferred with all the leftist prisoners to Dastgerd in Esfahan.

Alghaspour explains in this regard:

“We were wondering why they were transferred with us to Esfahan while all the Mojahedin prisoners were kept in Ahwaz. When we came back they immediately took Fatemeh Hajian to the court which handed down her execution sentence. On the way back from the court, Fatemeh escaped from the prison officers. However, she could not find any safe place to hide. Fatemeh Hajian was reportedly arrested a couple of days later and executed immediately.”

Abbas Bakhtiary also quotes some families who, while burying their children, had witnessed a female body covered under thin layers of soil:

“At the burial place of the prisoners next to the garrison, a female political prisoner had been buried earlier. Her grave was a few metres away from the mass grave where Bahram Kargarfard and five other executed prisoners were buried. Hers and other individual graves were not yet covered by iron line and cement. Four fingers of her right hand were sticking out of the ground. Some of her hair was lying on the ground. It was clear their graves were not deep. We and another family threw dirt into the grave. Her family were informed of her execution after several months and said they didn’t know she had been executed. Being a supporter of the Fedaian Khalq Guerilla Organisation (Minority), she had been transferred to this prison from Shiraz. We don’t know the names of many of executed prisoners, but there are people who do. Besides this girl, several other supporters of Guerilla Organisation were killed in mass executions by firing squad. They had been arrested and executed for handing out anti-war pamphlets in a park in Shiraz’s Park some years earlier.”

The families have told Abbas Bakhtiary that they were not allowed to stay at the graves for more than five minutes. The case was the same even for families coming from distant places.

Other families whose names and identifying information remain confidential for security reasons have reported that in the early years following the massacre, the families who went to this cemetery to visit their children’s graves were harassed by agents if numerous people gathered there.

*In the production of this article, testimonies of Mehri Elghaspour, Abbas Bakhtiari, Fatemeh Moradi Shalal, Javad Ghalavand and a member of a victim’s family, who wishes to remain anonymous for security reasons, were used. The short video was created by an activist who is in pursuit of seeking truth and justice.