After all, this is the Damned Land!

These photos were published alongside a report on the RaheTudeh website, showing a group of people visiting the mass graves in Ahwaz in 2007. These photos show the state of these mass graves as they were in 2007. 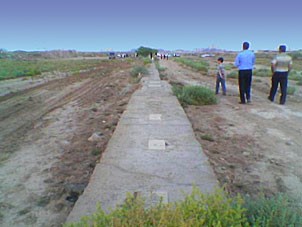 In this report, Rahman Bahmani describes his visit to these mass graves:

‘The Ahwaz Steel Factory was seen from far in a halo of dark dust, in an unpleasant ostentatiousness. Across from it and in front of us was Behsht Abad. There were houses around where we were, construction not yet completed. I remembered that, when we were on the dirt road, there were some residential buildings, too, but you could not find a single soul in the Damned Land.

The earth was slowly giving the sun’s heat back to the sky. I took another walk around there. This time, I noticed the heaps of soil. I could tell that trucks carrying construction debris dump it a few meters from here. It was obvious that they have excavated the area around the graves with a grader! Could it be that they are going to pour dirt on the graves?

I started walking towards the graves. It was different from all the other cemeteries. After all, this is the Damned Land!’ 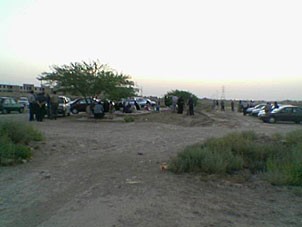 ‘As far as I can remember, they dug this last piece of land deep in the ground, but it was a different story here. The graves were elevated from the ground with a cement block.

Most of the graves were like this, but some others had dirt poured around them, and there were no more cement blocks to be seen. They had attended to these graves, so to speak.

The graves were in a double row stretching for 20 meters. After that they were in a single row stretching far from sight, right into the horizon and you couldn’t see the end of it in that hot summer sunset. You had to squint in order to look at the end of it in the horizon. I started walking slowly by the graves, and counting quietly, 1, 2, 3… 50, 51… 99, 100, 101… 122. Yes, a hundred and twenty two people.’