Rasht, Tazehh Abad: You sold the graves, what did you do to the bones?

Some of these prisoners were under 18 years of age at the time of their arrests, including Zari Dadsetan. In this video, Shayesteh Vatandoost testifies about her and other executed women prisoners:

‘In Rasht, after months of officials concealing the fates of the prisoners from families, [families] were called to the Navy’s prison and read the names of the executed prisoners aloud, in front of the prison.’

Ahmad Mousavi, one of the surviving prisoners from Rasht of the 1988 massacre, describes the events of that day as her sister recalled to him:

‘Everyone was ill with anxiety. Everyone was looking for the slightest clue to discern what happened to their children, brothers, sisters, spouses, and loved ones in prison, and what fate they had endured. After months of no accountability, they had gathered families to talk to them about the situation of their children. The air in their chests stood still. No one had the strength to speak a word.

Everyone, distressed, haloed by hope and anticipation, was stuck staring at the mouths of the prison officials in an atmosphere of tense fear, to see and hear which ones among them would never again be able meet with their loved ones. The names of several prisoners were read; their families were asked to move to the side. It left everyone with a lump in their throat. The eyes of the families whose loved ones were named met with those of the others. No one knew if those names belonged to victims or survivors. The tension was building up. There was no conclusion yet for the crowd. Gradually, tears began falling on cheeks. The prison warden’s voice shook the crowd again. More names were read, as their families were asked to come forward. They were each handed a small piece of paper. On that paper, there was written the date when the belongings of the prisoners were to be delivered to their families. Suddenly, everyone broke into tears and the catastrophe, clearer than death, collapsed on the families like rubble. After years of being stranded before prisons, a piece of paper was all that was left in the hands of a scornful mother, a woeful father, a mourning spouse, and a restless child…’

The information obtained from eyewitnesses reveal that as the executions in Rasht’s Navy Prison were being carried out, four big ditches were created simultaneously in a remote area in Rasht’s Tazehh Abad Cemetery, which were filled and covered in almost ten days.

This section of the Tazehh Abad Cemetery at the far-western side, which is the burial site of the Iran’s political prisoners executed in the early 80’s, was called ‘the damned land’ by government officials.

This information corroborates with the changes that the families of the victims reported seeing at the grounds near the burial site of their relatives. It seems that between early and mid-August 1988, the families had noticed several ditches being dug near the area.

An eyewitness, whose identity is kept confidential by Justice for Iran for security reasons, explains:

‘There were three ditches. By ditch, I mean a huge one, as big as a nine or six cubic meters in room—I can’t remember the exact dimensions, but I remember they were very big—there were three of them in a row… There was a coffin, too, full of blood. There was also a bloody shirt on the ground. We saw a man weeping there. My mom asked him what those ditches were. He said, ‘It looks like they had dug one last week, which is now filled up. They told me they have buried my child in that one…’

Then we asked the man who was digging the ditches and burying bodies, what those graves were for. He said, ‘several nights ago, they came in a Nissan pickup truck and ditched some corpses in them; when we arrived, it was already full- completely covered with soil… They are executing everyone.’ We then asked ‘How is that [possible]? What do you mean they are executing [everyone]?’ After 1983, 1984 and 1985, there weren’t many executions like before…’

‘Several months later, I went to Tazehh Abad, again. I saw families coming to the graves, but there were no markings, they weren’t putting anything there but flowers. Then, I would inquire from multiple people, and they would say that there were four [mass] graves as big as nine meters in room, where those executed in or near Rasht were buried collectively. Every year as we visited our own buried loved one, these graves were there, families would come and leave flowers.’ 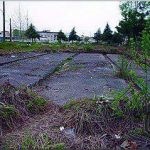 Asghar Mehdizadeh, former political prisoner from Gilan province, recalls accounts from the families of the victims:

‘They had dug the place up with excavators. I am quoting eyewitnesseses. Each time the locals saw the excavator’s operator, they told would point at him and tell him you killed someone’s child, and he had developed this disturbed mental state.

Every time the families of the martyrs, including Hassan Taravat’s mother, Ali Vasli’s mother and other mothers would visit the grave, only on Friday nights that is, they would beat them up, insult them and sometimes arrest them. That place was forbidden.’

Asghar Mehdizadeh once visited this site during a relative’s burial in 1997, when he saw a six-by-seven  meters surface covering the mass grave.

There are no armies whose trace is non-existent

Justice for Iran’s research shows that since 2009, Iran’s officials have concealed mass graves under new graves built and sold for the same reason. Therefore, mass graves in Tazeh Abad have been concealed from the public eye. 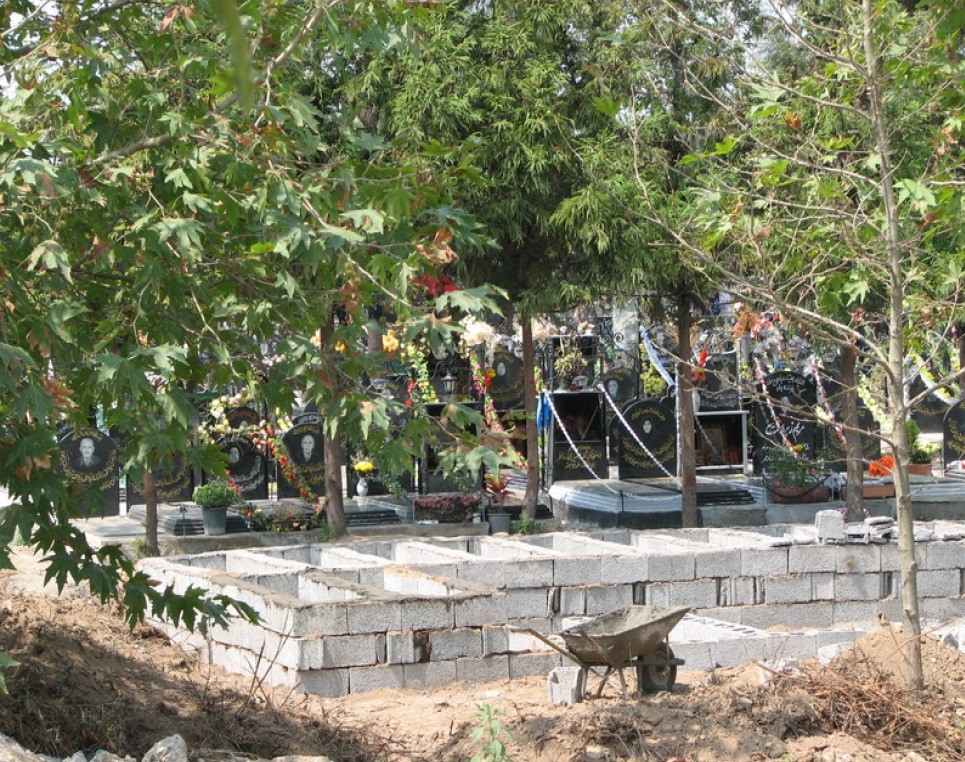 Caption: Part of the mass graves in a remote part of the Tazeh Abad cemetery in Rasht, which is being destroyed by building new individual graves on top of it 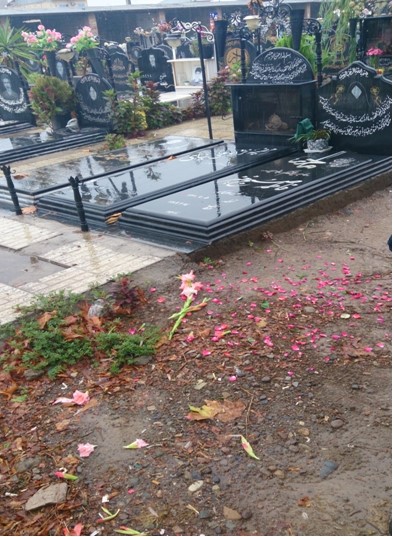 Caption: The Islamic Republic’s officials have concealed the mass graves where victims of the 1988 massacre in Tazeh Abad, Rasht have been buried, under newly built individual graves.

Currently, only the families who had seen this area before its destruction are aware of the existence of mass graves there. It seems as though the buyers of these new grave plots have been given no information about the history of this piece of land.

The same eyewitness who saw the ditches before they were filled, says:

‘I hadn’t been there in a long time. I went there last year (2017), only to find that all those mass graves had been sold to people, and new graves were in their places. I asked one of them how they bought those graves.

They said they’d bought it from the Tazeh Abad organization in Rasht. I asked if they had been told that there were graves in this place. They said, ‘no, this place used to be a barren land, there were no graves.’ I kept asking, when you were digging these graves for your own deceased, there was no corpse- nothing in it? And they kept saying ‘no, this was a wasteland.’

I kept thinking to myself, what did they do to the bones when they sold these plots to people? How did they turn that land into a deserted barren land to sell later?! The bones haven’t been decomposed!

…The only sign of this place being the place where executed prisoners are resting, is a few graves for some individuals executed during the 80’s, laying 20 meters to the side of these mass graves.’

Reviewing of the satellite images confirms the construction of new graves in this area. 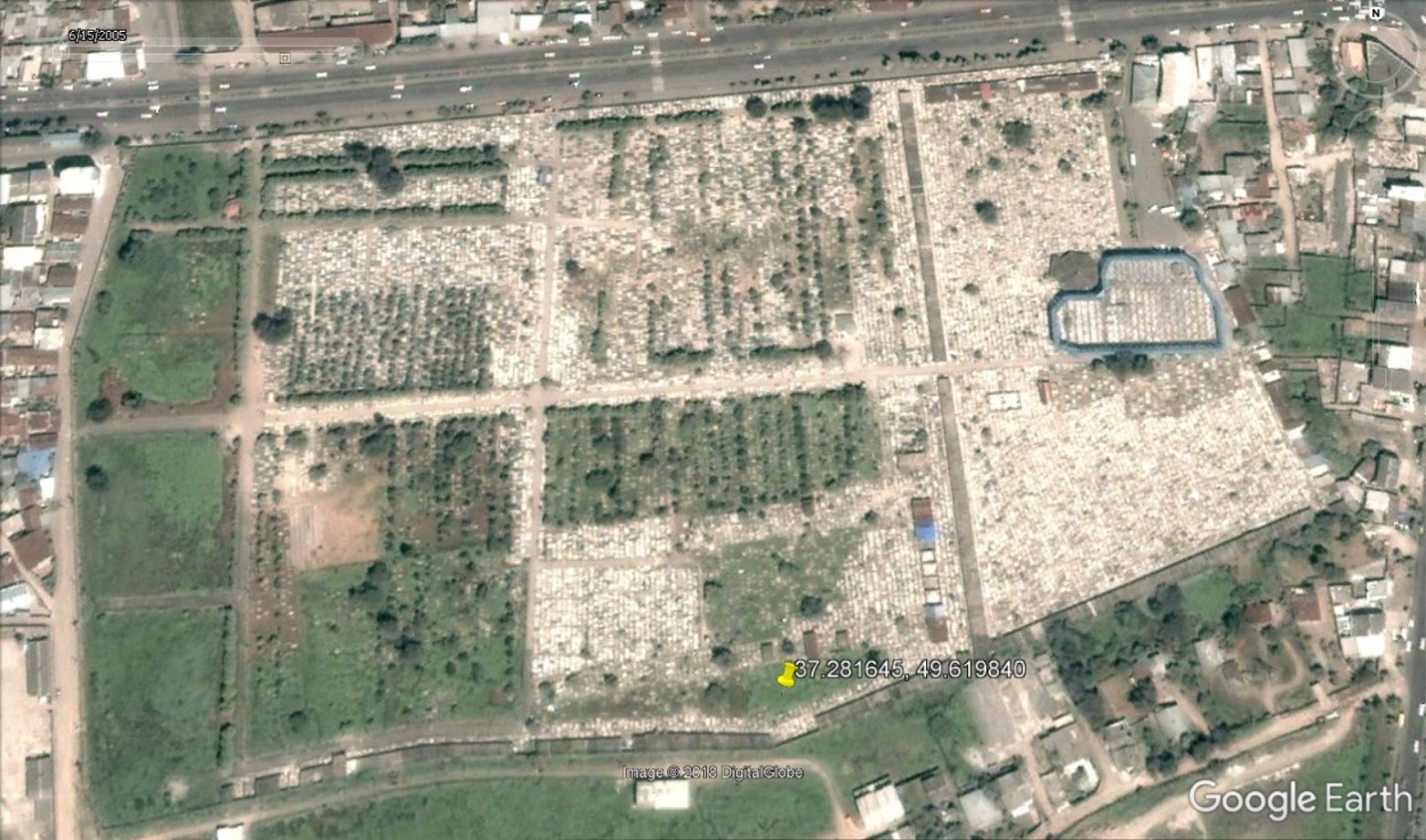 Caption: In this Google Earth image from 2005, this part of the Tazeh Abad cemetery is seen as level and bare from above. 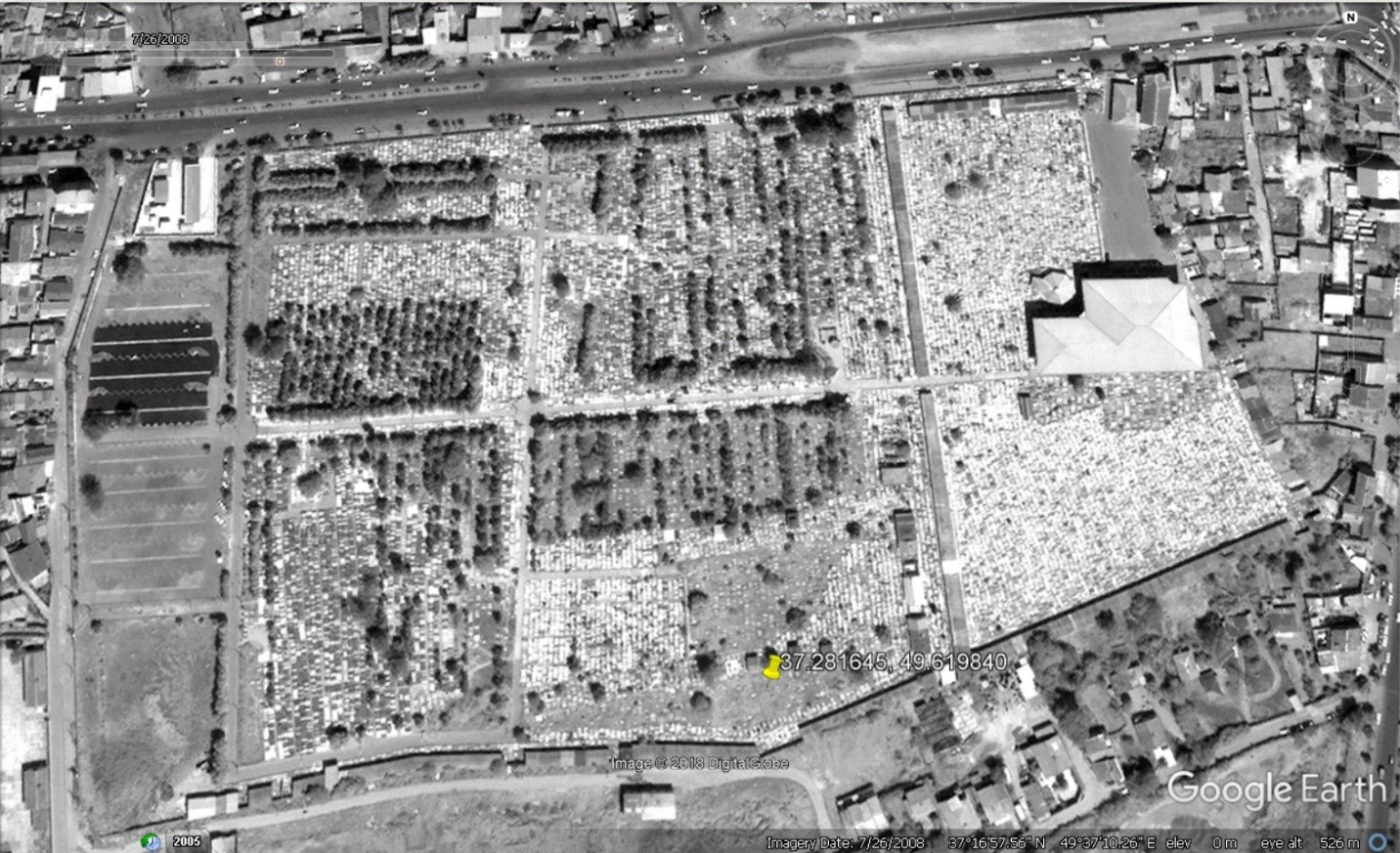 [Caption:] In this more recent Google Earth image from 2008, an operation to construct new graves the same part of Tazeh Abad is clearly recognizable. 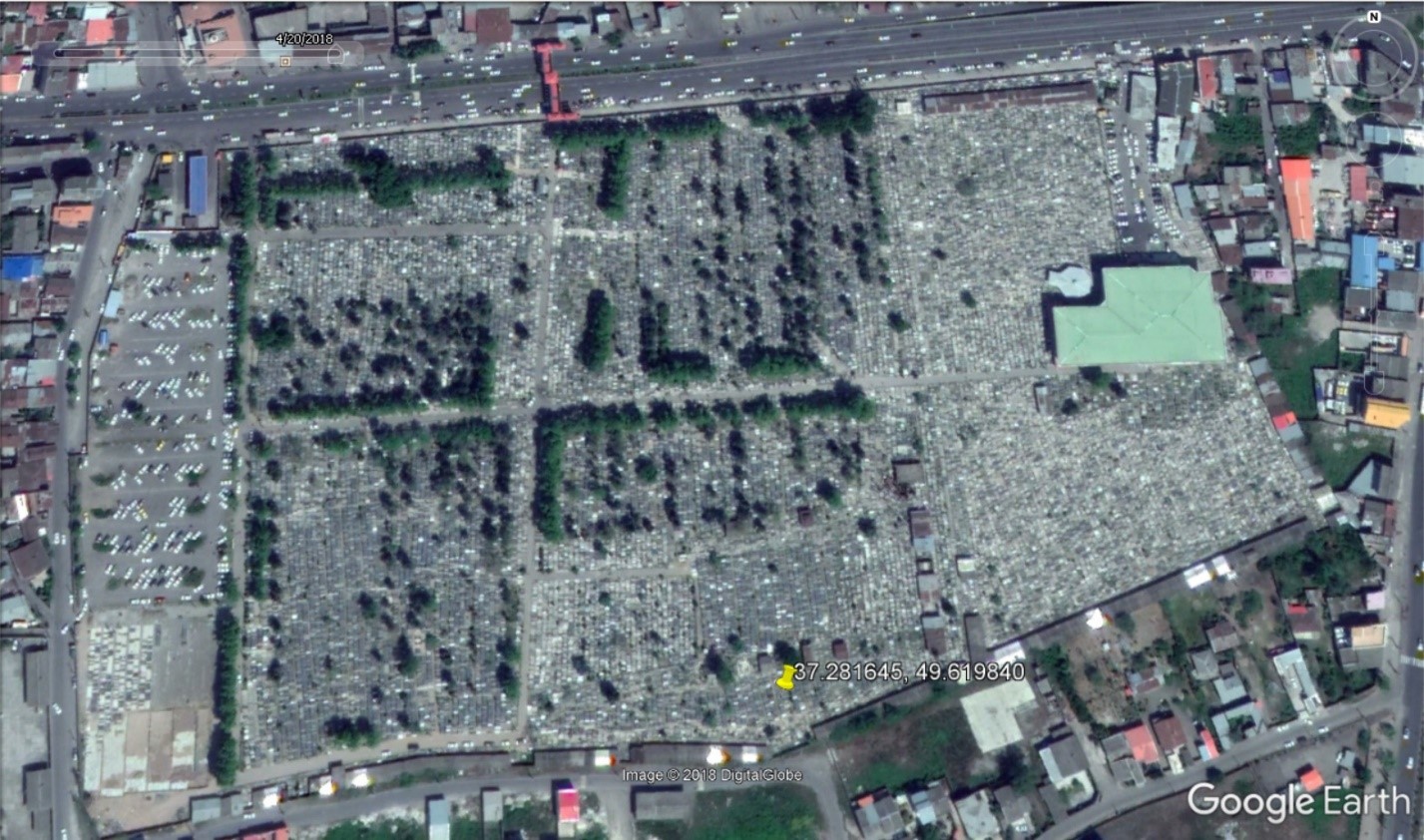 This is the most recent satellite image, obtained  in 2016, showing that this entire area has been covered with new graves.

Justice for Iran continues to try to identify the bodies buried in the Tazeh Abad Cemetery. Some suspect that the officials have secretly taken the remains out and transferred them or spread them in other mass graves. Some other believe that officials have expanded the mass graves by digging deeper into the ground and built the new grave plots on top. The concern remains that, with such destruction, any possibility of obtaining a complete picture of past events at Tazeh Abad has been destroyed.