Local witnesses have told Justice for Iran that there are two mass graves near one of the entrances to Agha Seyyed Morteza Cemetery in Lahijan, located between 17th Kashef Street and Kashani Street. The smaller of the two belongs to the women who were executed in the 1988 massacre, and the larger one belongs to the men.

Unfortunately, no detailed account is available of how the 1988 massacre happened in Lahijan’s Malek-e Ashtar Prison. However, according to informed locals, if you enter Agha Seyyed Morteza Cemetery from the main entrance on Niakan Alley, West Kashef Street, the area on the left is where male prisoners have been buried. Several tens of meters away in the very middle, next to a house’s wall, is where Mujahedin women have been buried. These reports are mainly based on the testimonies of neighbours who lived northeast of the cemetery at the time of the massacre. 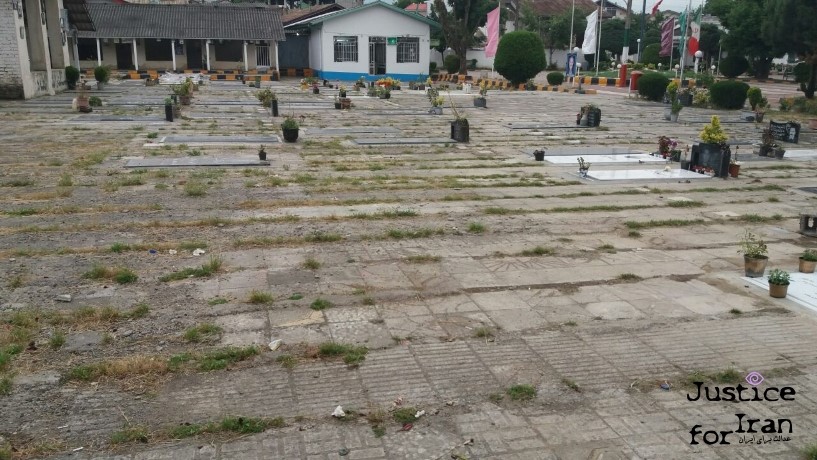 Akbar Kazemi, who was imprisoned in Malek-e Ashtar until 3 July 1988, testifies:

‘One day between the 11th or 13th of November 1988 and 18th, I saw an old friend who was released in 1986. I asked if he’s heard from our friends in prison. He was very anxious. He said they have executed many of them. I asked where he got that information. He gave me his home address and told me that he lives near one of the cemeteries in the city. The Agha Seyyed Morteza cemetery was close to where he lived, about 300 to 400 meters away. Then, he said his neighbours had noticed multiple excavators in the cemetery two nights ago, which was very strange, given that it’s a cemetery. Especially back then, 25 to 30 years ago, this was very strange for excavators to show up at a cemetery.

I asked what the sound of excavators digging had to do with the executions. He answered that one of the neighbours, who had a view of the cemetery from her house, saw two or three excavators dig the ground, then saw a truck come—a ten-tonne truck— and dump corpses into the excavated holes. Then they covered the bodies with soil. He concluded that this must have been a matter of mass executions, because there was no collision or accident of that magnitude. He continued, saying that a woman in their neighbourhood complained that the dogs were barking and howling all night, not allowing them to sleep until the morning. Because they were trying to do this quickly, they had buried them in a shallow pit. So, the dogs could smell the blood and the flesh, digging with their paws until they reached a corpse. This caused other dogs to follow, until people went there in the morning to see what was going on, and it was clear by then. Firstly, because it was a new place, there was grass all around, but where they had excavated was all dirt, the soil was uneven and was obviously not pressed down. Also, one part was lower than the surface showing where the bodies were buried the night before.

I wanted to make sure about what I had heard, so I went there two days later, very early in the morning, around five. I went there early so I wouldn’t be seen. I entered the cemetery from the large door, through which cars could enter. Without any extra effort to look around and find the place, I noticed it. This was because, 90 to 100 meters across from me was an area green with grass, and in its middle, there was a lot of soil protruding, like loose dirt.

It was clear that this place was recently excavated. I saw from afar that a few people are standing there as well. I was surprised because it was an early hour. That was when I became certain that this is a mass grave, created after a massacre. I went forward and saw them holding shovels, pickaxes, and other excavating tools, that I figured was used for the same purpose. I started walking towards them to ask them things, but then one of them started walking towards me. I think he was the taskmaster and the rest were workers. He was curious as to why I was there early in the morning. I asked, ‘are these the people who had an accident while on the bus?’ He was shocked and didn’t want the workers to find out about it. He said, ‘yes, these are those who were in the accident.’ I asked, ‘The one where two buses hit one-another and most of them died?’ He said ‘Yeah, yeah.’ I asked, ‘You have buried them here?’ He said, ‘yes, we have buried them here.’ Then I said, ‘You mean that you’ve buried all of them in one place and covered it with soil?’

He was surprised with my questions and didn’t say anything else. All he said was yes, and nothing else. I kept watching. As I walked there, I realized the excavated area was almost 30 to 35 meters long. The workers kept fortifying its sides. Some were bringing soil with wheelbarrows, some placing stones. I passed by them and stepped out of there through a small door, big enough for one person. I decided I could not stay there, since the sky was getting brighter and there could certainly be some security-intelligence forces among them. I stepped out quietly and got away from the area quickly. I still wasn’t certain on the scale of the matter.

The next day I tried going back, but I was afraid they would recognize me, since they were still working on it. I went to Tehran and came back to the same place, two weeks later. What I saw was a cemented area. As I measured with my steps, I found out the length of the mass grave was 30 to 33 meters long, and the width was between three and three-and-a-half. I measured three times. By that, I mean, I walked there three times and measured with my steps.

In its vicinity, there was a place where my friend’s neighbours believed women were buried. I went there to measure it. The mass grave was about three to four meters by one to one-and-a-half. There was a crack in the cement, because it had rained before [the cement] dried. Its surface was uneven and had many pickaxe marks. It was clear to me that it was a mass grave.’

Another informed local confirmed in an interview with Justice for Iran, that men and women political prisoners in Lahijan in 1988 were buried in two separate mass graves. We compared available records to identify those potentially buried in the graves. The Mujahedin’s list contains ten men and one woman; IranSOS’s list contains 23 men and one woman; The Boroumand Foundation’s list contains 11 men and one woman; and a separate list by the Mujahedin has 15 men and two women. In all these records, the charge of executed prisoners was sympathising with, or membership in, the Mujahedin. However, the list compiled by Akbar Kazemi which was exclusively shared with Justice for Iran, names 57 executed male prisoners, five of which had charges of membership in or sympathising with leftist political organizations, including the Communist Union, Peykar, and  the Ashraf Dehghani Group (Mahmoud Moeini, Sirous Zirak, Rasoul Razavi, Fariborz Ilbeigi, and Hamzeh).

There is far less information known about the women executed in Lahijan’s Malek-e Ashtar Prison. In addition to Tayyebeh Shirazi, whose name appears in the published records, one of the lists mentions Shohreh Joukar and Shirin Joukar as two women possibly buried in Lahijan’s mass graves. The same source states the number of women prisoners executed in Lahijan to be 11. 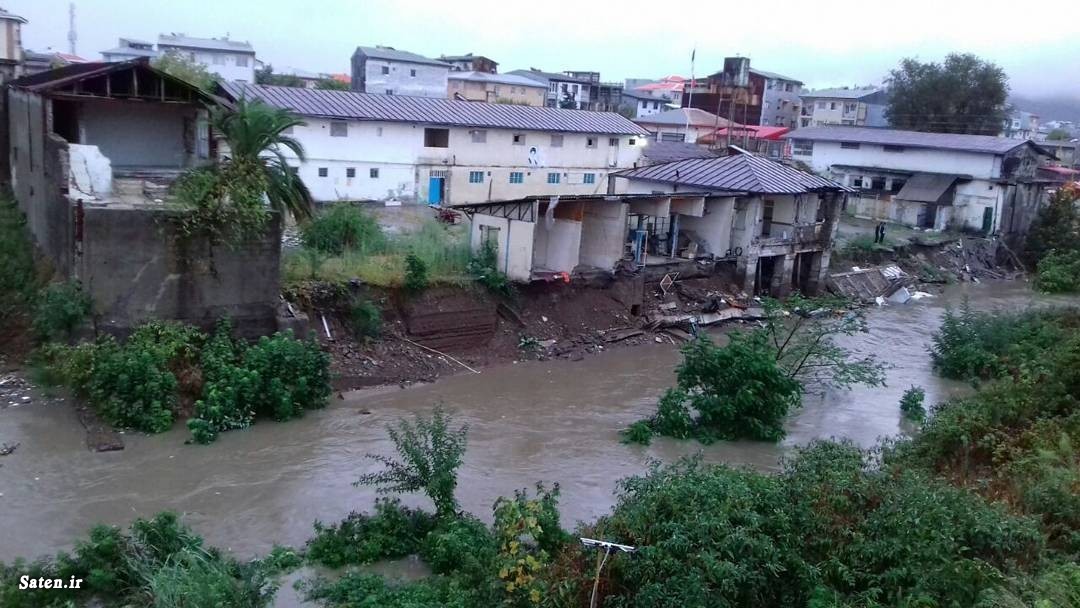 Caption: Malek-e Ashtar Prison, Lahijan, Iran, the collapse of the wall next to the river due to landslide and flood in 2017

Combining all the records, there are a total of 81 names (78 men and three women) who are potentially buried in Agha Seyyed Morteza Cemetery’s mass graves during the 1988 massacre in Lahijan.

‘I used to visit that area later, too, especially on Friday nights. I could see flowers put on the mass graves. Their mothers would come and place flowers and candles there. On several occasions, I saw stones engraved with the names of prisoners whose mothers, based on information or assumption, believed them to be buried there. The authorities had broken some of those stones. I saw two or three broken ones. It was a mass grave, but they believed their sons are buried in it. The last time I visited there was 1995, and it looked like this.’

The volunteers of Hrana, a human rights activist group, have described the current situation of this section of Agha Seyyed Morteza Cemetery, in a report shared with Justice for Iran in May 2017, as below:

‘This area is almost separate from the rest of the cemetery and is nearly 300 square meters. There were between 35 to 45 graves, each assigned a code. For example, on a 20 x 25-centimetre stone, there would be written the letters A. H. and two or three digits engraved under it. It was not determinable what these numbers represented. In between these graves, there were some graves with engraved names and surnames, but on small stones like the other ones. The arrangement and the similarity in shape suggested that these graves are not ordinary graves.’ 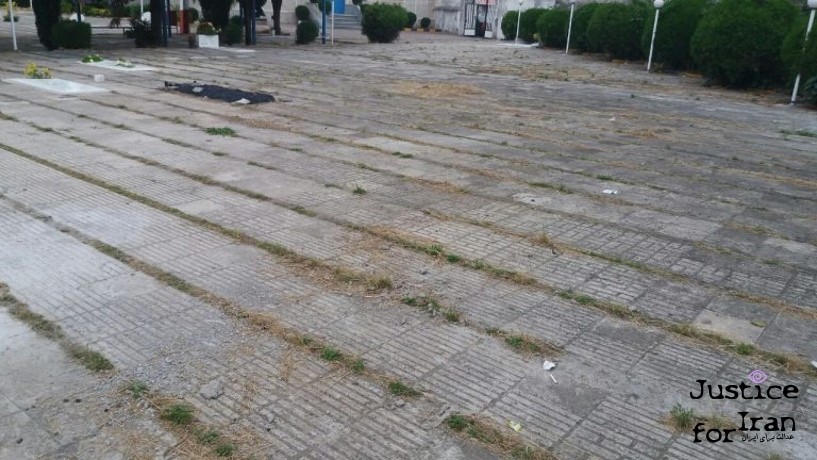 The photos that Hrana has taken from this section of Agha Seyyed Morteza Cemetery show a relatively vast and empty area which appears to be where one of the places with mass graves underneath. However, a man who appeared to be a worker at the adjacent mosque, did not allow them to finish documenting, filming and photographing:

‘This section is precisely in view of the management and security section of the cemetery and the mosque, which had their window and entrance door toward this area. Two people working security were clearly alert with our presence and the one who was working in the mosque right beside the place directly asked us what we were after in there.’

*In writing this article, Justice for Iran has used the testimonies of Akbar Kazemi and of two informed locals, whose identities are being kept confidential by Justice for Iran, in addition to other public reports and information. The photos in this article were taken by volunteers human rights activists and exclusively shared with Justice for Iran.