Shiraz, Darrolrahmeh: No one saw a thing, no one knows for sure

At the end of the Darrolrahmeh cemetery in Shiraz, there is an area the officials know as ‘the place of the damned.’ Once considered an abandoned place, the area is a burial site for extrajudicially executed political prisoners.

Solat Sheikhnia was imprisoned in Shiraz’s Adel Abad Prison during the 1980. She testifies about experiences with her friend and her friend’s cousin, a young man who worked at the funeral home in Darrolrahmeh:

He told her trucks came, carrying bodies in the middle of the night. They buried the bodies, but some were making noises until morning — so, some were still alive, and you could hear their shrieks and groans…’

Solat Sheikhnia says the young man’s health was affected by this.

Nearly 200 men and women were executed in Shiraz during 1988, whose families never received their remains. Authorities told only a handful of families that their children were buried someplace, leading them to unkempt graves covered with cement stones in Darrolrahmeh or sites like Kazeroun. Many families never believed them.

Shora Mokaremi, mother of Fatemeh Zarei, was the parliamentary candidate for the Mujahedin. She was arrested, sentenced to ten years in prison, and was ultimately executed during the 1988 massacres. Fatemeh Zarei describes the subsequent experiences with her grandmother, Shora Mokaremi’s mother:

‘Each time we went there for a visitation, [officials] would tell us she wasn’t there. We no longer knew where she was. For four months, visitations were banned…

…After four months, they called all the mothers and fathers into the ward. They told them to just go in and their question would be answered. When we went in, they told us; ‘Your kids have been executed, here are their papers.’

We kept thinking about where their graves were. They must have buried Fatemeh somewhere. Then, they said ‘This is your daughter’s grave.’

Pardis (pseudonym) witnessed many of her fellow inmates’ executions during the 1988 massacres. After her release from prison, she visited the families of Zahra Ranjbar, Fatemeh Saraati and Fatemeh Masoumi to deliver information about the events prior to the massacres:

‘I know that sections of the graves were shown to them. For example the [Ranjbar] family was one family from which several were executed. They kids were all Mujahedin. Their oldest son [was executed] in 1982, and Zahra, my own fellow inmate, was executed in 1988.

To the best of my memory, they did show their mother their grave sites. They told her, ‘here, this is your daughter’s grave.’ Why they told them, I don’t know. The family would go and say to them, ‘where’s our child, where’s our child?’

They kept repeating this, and they were shown a grave site. But there was still room for doubt. Their family and I were never certain. Why didn’t anyone ever see the body or the grave? They designated some places as Zahra’s, Afsaneh’s, and Fatemeh’s. As to whether any of it is true, none of us are certain.

Did they bury everyone in one hole, and later point to it and say the name s of individuals? I don’t know how accurate that is.’

‘According to a prison guard, 400 Mujahedin men and women remained in two prisons, Adel Abad and Shiraz’s Sepah detention centre; and at 1:00 A.M. they were taken away in specific trucks by special forces. They denied that any regular prison officials were involved.

God knows where they were taken and what was done to them. Of course, there were rumours about it. From some people’s perspectives, they’d been taken someplace remote. First, they drugged them, then buried them in a mass grave.’

Jahangir Esmailpour, who was arrested and held in Adel Abad prison with victims of the 1988 massacres, visited the section of Darrolrahmeh known as the damned land several times between 1981 and 1982. He describes the area in his testimony:

‘When I entered the front gates, from the left, I’d go to the end [of Darrolrahmeh].  Certainly for those years, it was becoming more extensive due to the rise in killings. Anyway, when I went from the left, 1.5 to 2 kilometers in was the area known as the damned land.

What lingers in my mind is approximately southeast, at the end of the regular plots in the southeast was plot number ten. After plot number ten, there was wilderness. At its edge were ordinary plots, where children were buried in an area smaller than the size of a football field. Certainly, the graves of those killed in 1981 and 1982 were heaps of dirt. Occasionally, families would come and pour cement. The next night, or the next day, [officials] would come and dig up the cement so no markers would remain.

One of the local experts here, whose identity is being kept confidential by Justice for Iran, testified:

‘During the massacre, the third part of Darrolrahmeh, now called the second exit, is where an excavator dug a channel-like area. After, they took groups of prisoners executed each night, put them in the channel, and covered them with dirt. They continued just like that, through the massacre. Families, despite not knowing where their children were buried, each marked where they thought their children’s graves might be—either with some stones or cement slabs.

I, myself, witnessed this area from up close, on the left by the exit, between 2000 and 2001. Back then, it was blocked-off by a short wall, and no graves could be found. All were broken and shattered. That short wall is still standing today, just as it is visible in the videos. There’s a phrase or sentence written on it, that’s been covered by paint, and the writing has been obscured. I’ve heard that it used to read ‘the executed of 1988’ and that officials later painted over it. 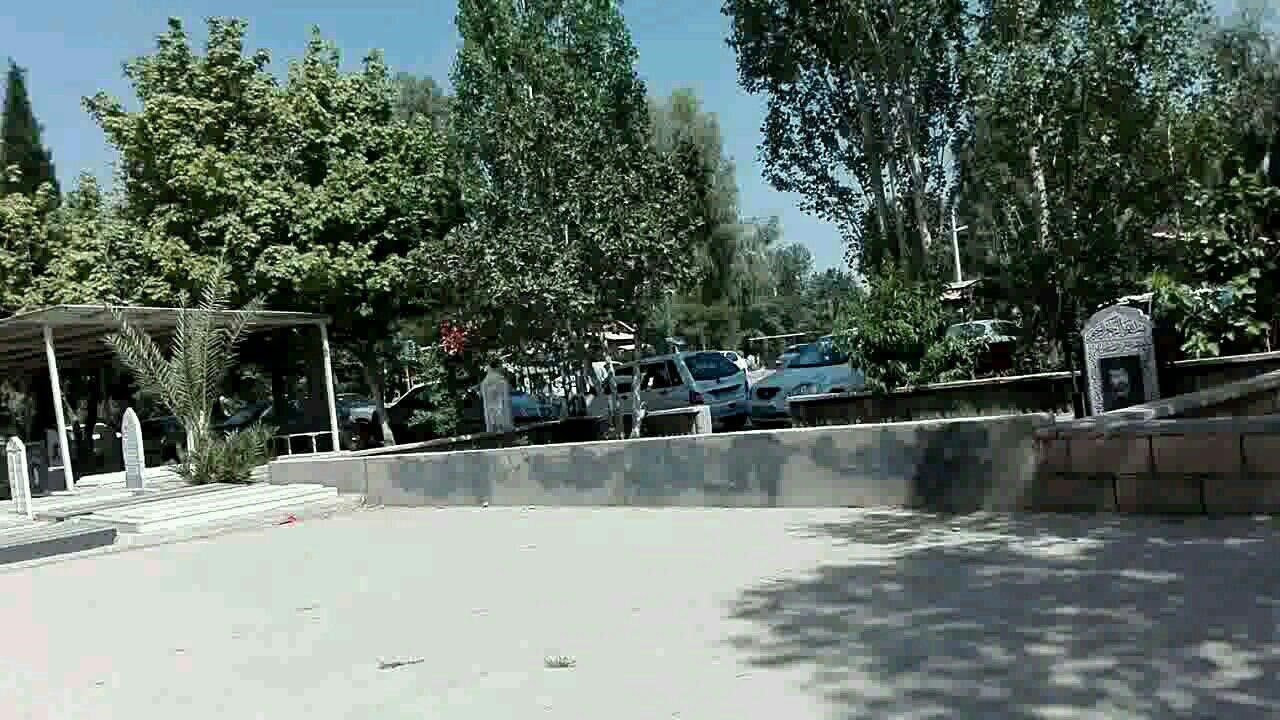 A few years ago, this area of Darrolrahmeh was razed and repaved with a mosaic grid, to be sold as new grave plots. Today, numerous graves have been created over the burial sites of executed massacre victims here. This has been done in such a way that no signs remain of that era.

These plots are located immediately left of the entrance gate, and their appearance is entirely new and defined by the mosaics. This gate is adjacent to the Abu Zarghafaei Boulevard. The graves of those executed in the 80s are located to the left.

Comparing this map with a current map of Darrolrahmeh, these satellite maps indicate that this area is completely covered with new graves. 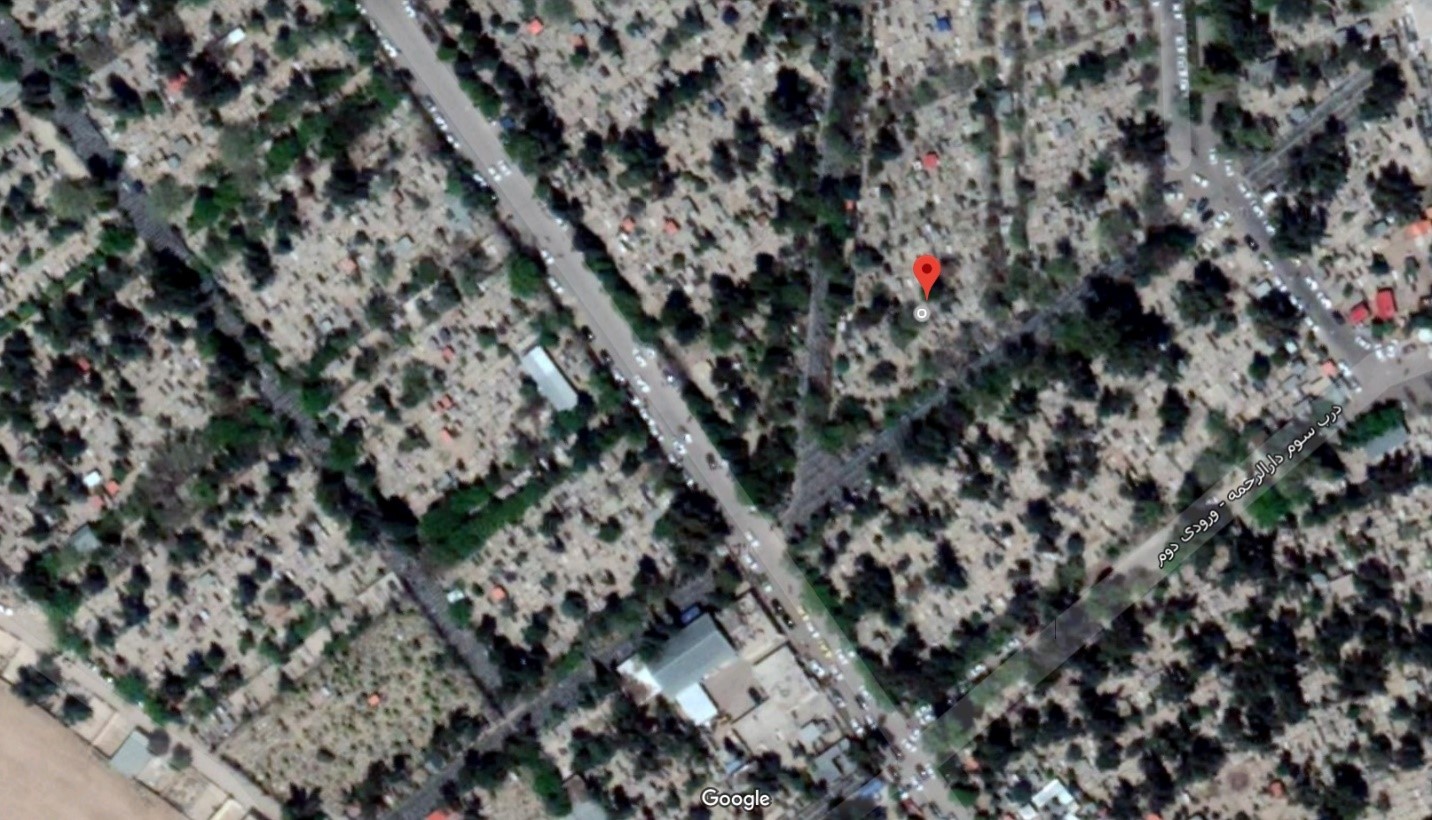 [Caption:] Last satellite image taken of the site before this page was last updated, 2018

More evidence for this came in March 2017, as the managing director of the Shiraz Municipality Cemeteries Organisation announced that Darrolrahmeh no longer has vacant plots, and that all deceased will henceforth be buried in another cemetery, called Behesht-e Ahmadi.

Any mass graves in Darrolrahmeh are now completely covered by new graves, and therefore cannot be accessed.