In the Shade of the Lotus Tree

The photos and information in this article were provided to Justice for Iran by Abbas Bakhtiary, a writer and former political prisoner.

A number of political prisoners held in the Karun prison of Ahwaz were executed in the Darvish Garrison at night in the summer of1988. The firing squad consisted of the guards transferred from Ahwaz prison to the Garrison along with Tizmaqz (the ex-prosecutor of Ahwaz).

Thirty killed prisoners were buried in mass or individual graves at the left of the entrance to the Darvish Garrison. The Garrison belonged to the Islamic Revolutionary Guard Corps (IRGC).

A security guard who worked at the time in a construction company near the Garrison recounted his observations:

‘There were 30 of them shot in the desert lands around the Garrison. Their bodies were dumped into a trench and covered by dirt. Dogs gathered around the graves and howled all night long. Two weeks later some men covered the graves with cement and iron lines. Three months later after, when two families came to visit the graves, the cement had solidified. The mother of Siavash Salehizadeh, one of the prisoners executed during the massacre, was shocked when she found her son was buried in the desert and said: ‘Why in the desert? Aren’t there enough cemeteries for burying them?’ Then she walked around the mass grave and mourned for all of them.’ 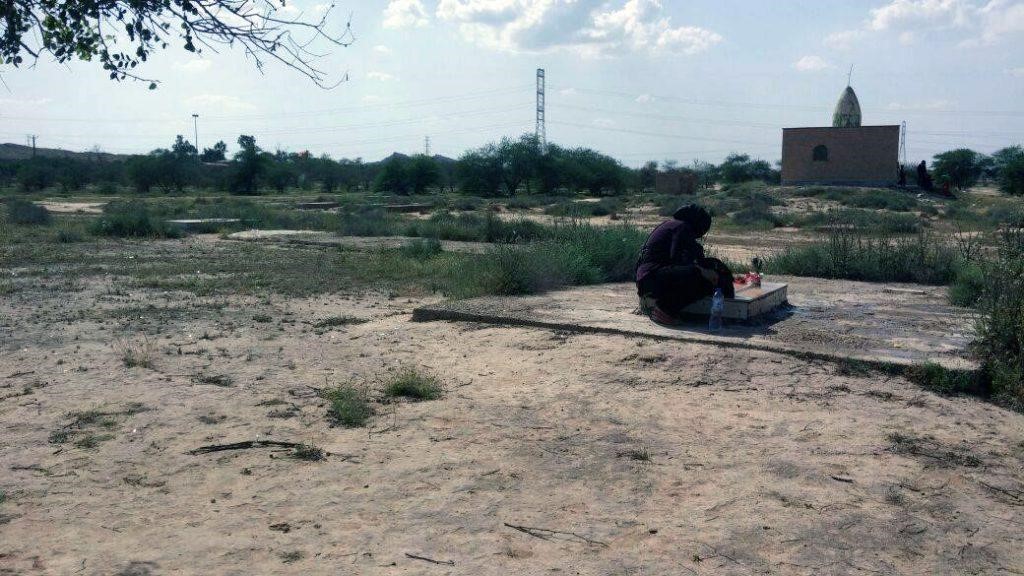 ‘We didn’t know our children were executed. Prison officials told us they were incommunicado. We were stranded for three months. After many inquiries they told us our loved ones were going to get out of jail and we could take them from Nava Prison of Bandar-e Mahshahr. It was weird because as far as we knew Siavash was transferred to Ahwaz. When I went to Nava Prison, they gave me Siavash’s bag and clothes.

From then on, I started crying about the crime in public and informing the inhabitants of Bandar-e Shahpour (today known as Bandar-e Imam Khomeini) of what had happened. Regime guards raided our home several times and persecuted and assaulted me and my family. However, they failed to make me silent. One day they hit me by car in front of our house. I broke my leg and was taken to hospital.

At the burial place of the executed prisoners next to the Garrison, a female political prisoner had been buried earlier. Her grave was a few meters away from the mass grave where Bahram Kargarfar and five others were buried. Hers and other individual graves were not yet covered by iron line and cement. Four fingers of her right hand were sticking out of the ground. Some of her hair was lying on the ground. It was clear their grave was not deep. We and another family threw dirt into the grave. Her family was informed of her execution after several months and said they didn’t know she was executed. Being a sympathizer of the Fedaian-e Khalq Guerrilla Organization (Minority), she had been transferred to this prison from Shiraz. We don’t know the name of many executed prisoners, but there are people who do. Besides this girl, several other supporters of Guerrilla Organization were killed in mass executions by firing squad. They had been arrested and executed for handing out anti-war pamphlets in Shiraz Park some years earlier.

We don’t know why the Fedaian sympathizers were buried hastily in shallow graves. It was perhaps accidental. Neither we nor the families coming from distant places could stay longer than five minutes at the graves. Soldiers in watchtowers warned us to leave the grave site. We were not allowed to place tombstones on graves, but we did. They broke them several times, and then stopped. Earlier, mourning at the graves was prohibited. We couldn’t stay longer that 20 minutes.

We, along with two other families, asked the Ahwaz municipality to undertake the administration of Seyed Amir Cemetery, where our children were buried, so that families could place tombstones on their graves. One of the officials wrote a letter to the IRGC and asked for a permission, but they refused. Ahwaz municipality listed the graveyard under ‘the municipality’s unofficial cemeteries.’

Soldiers undergoing training at Darvish Garrison monitor families from watchtowers facing the grave site. If the families take photos, they descend from the tower and delete them from cameras or cell phones. They also threaten them that they would be no longer allowed to visit the graves, and usher them out of the cemetery. Families have been repeatedly insulted by the IRGC soldiers. However, there were soldiers who behaved differently and sympathized with them. 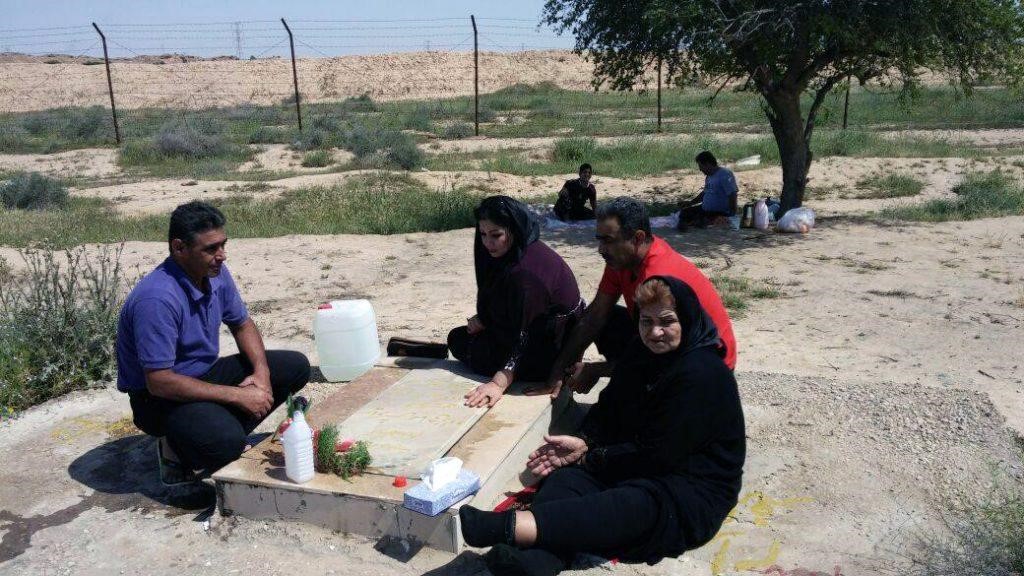 Families at the graves of the 1988 massacre victims. In the background, two family members are sitting at a mass grave next to the lotus tree. 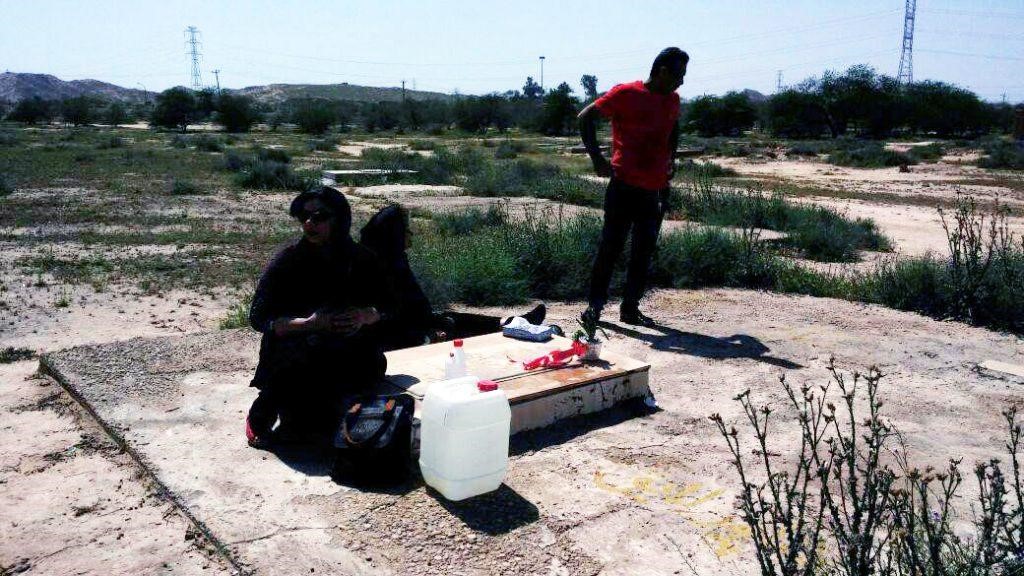 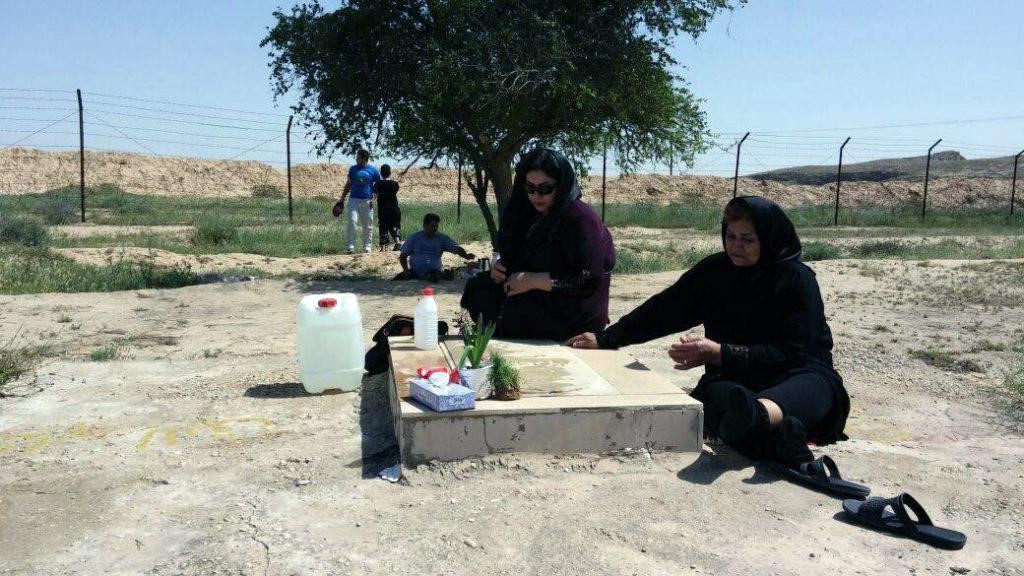 Shapour Layeq, Shapour Tavakoli, Siavash Salehizadeh, Azim Mohammadzadeh and Bahram Kargarfar are buried in one mass grave and others in another a few meters away, next to the lotus tree.