Sanandaj, the old Revolutionary Courthouse: Bones beneath the square

In the 1980s, the Revolutionary Court building in Sanandaj, located on former 6th Bahman Street (Municipality square, now) was a major detention center for political prisoners. Those sentenced to death after summary trials in the administrative section of the building were executed in the courtyard or in the basement under the parking lot. 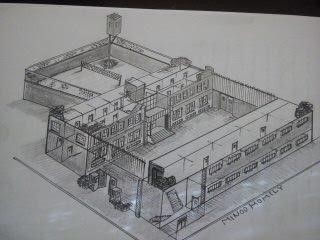 The Revolutionary Court of Sanandaj in the early 1980s. The image is drawn by Minoo Homily who was detained in the prison and witnessed the massacre.

Faeq Masoudi witnessed the executions carried out in the Revolutionary Court building in the early 1980s:

‘In the autumn of 1983, the Komala organisation in Tehran, and in Sanandaj and other cities of Kurdistan, were leaked. The main members of the organisation were arrested. The authorities were able to elicit much information from the arrested members. Consequently, 400 people were detained in Sanandaj during a couple of days. I was one of them. Each tiny cell was crammed with five or six persons. They interrogated prisoners and took them to the Revolutionary Court.

Two or three months later about June 1983, one night after dinner when we were walking through prison corridors, guards came by and called out several prisoners. They took away 20 or 30 inmates and executed them. Many of them were of my close friends or cellmates. They executed all including simple sympathizers and active supporters of opponent organizations. The execution rate increased in 1983.’ 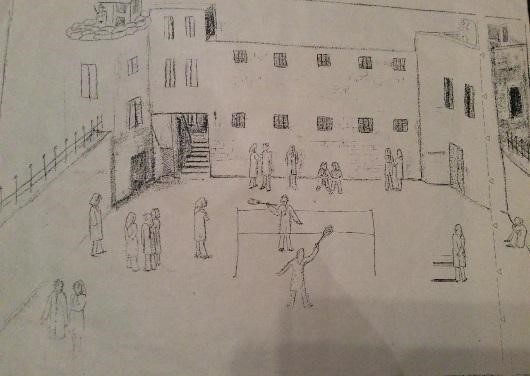 The courtyard of the revolutionary court, where Minoo Homily witnessed political prisoners shot by firing squad.

Many political activists, sympathizers and members of opponent political organizations, particularly Komala and Democrat parties, were arrested in Kurdistan in1988. Several of them were imprisoned in the revolutionary court building.

Survivors of the 1988 massacre in Sanandaj prison testified many of prisoners had been executed en masse in the basement during the first half of the year. Their bodies were never returned to their families.

Azad Zamani, arrested in Kurdistan in early 1988, is a survivor of Sanandaj Revolutionary Court massacre. He states:

‘I was arrested in my home on 1 February 1988. I was 13 years old. They put me in solitary confinement at SAVAK’s prison, where all cells were full. Then, I was taken to the prison of Revolutionary Court of Sanandaj and held there until late 1988.

Everything changed in August. The prison’s environment and guards’ behaviour changed. It was not clear who could survive and who would be executed. We didn’t know where our cellmates were taken. They packed ten or 20 of us in the dark basement at the prison for a while.

We waited for our executions every night. We didn’t know what would happen. Several prisoners were sent to Saqqez prison on bus. Some others were transferred to Kamyaran prison and executed there; others were taken to a place reportedly near a village between Qorveh and Sanandaj and executed there. The authorities called the place Lanatabad.

One night, prison guards took away 13 prisoners. A few days later, we found out thatall of them were executed. They had been tried, but their verdicts were not yet announced. They were waiting for court’s decision after their summary trials.

Executions were carried out in the basement of the Revolutionary Court. We heard firing but wondered if guards were shooting prisoners or if there was a clash in the city, or if it was part of a scare-tactics program. We had no access to the outside world. The prisoners, who were called out to be taken away, left us their personal belongings such as nail clippers, rosaries and their memoirs. They said if they did not send after them, we should know they were dead. A few days later, we learned all the 13 of them were executed. After them, 23 and 24 inmates were executed. Executions continued at a high rate for a couple of months.’

The building of the Revolutionary Court was later transferred to the Sanandaj Prisons Organization. In 2003, the authorities decided to convert a part of the building and its courtyard into a commercial property. Other parts were also integrated with the pavement and streets according to the municipality’s project of widening the square and streets. In the course of widening the street around the square, municipality workers discovered a mass grave. Even though this was reported in the local media, construction continued. It is not known what happened to the bodies buried there.

Karaftoo quarterly was banned following the publication of photos and news of the mass grave. 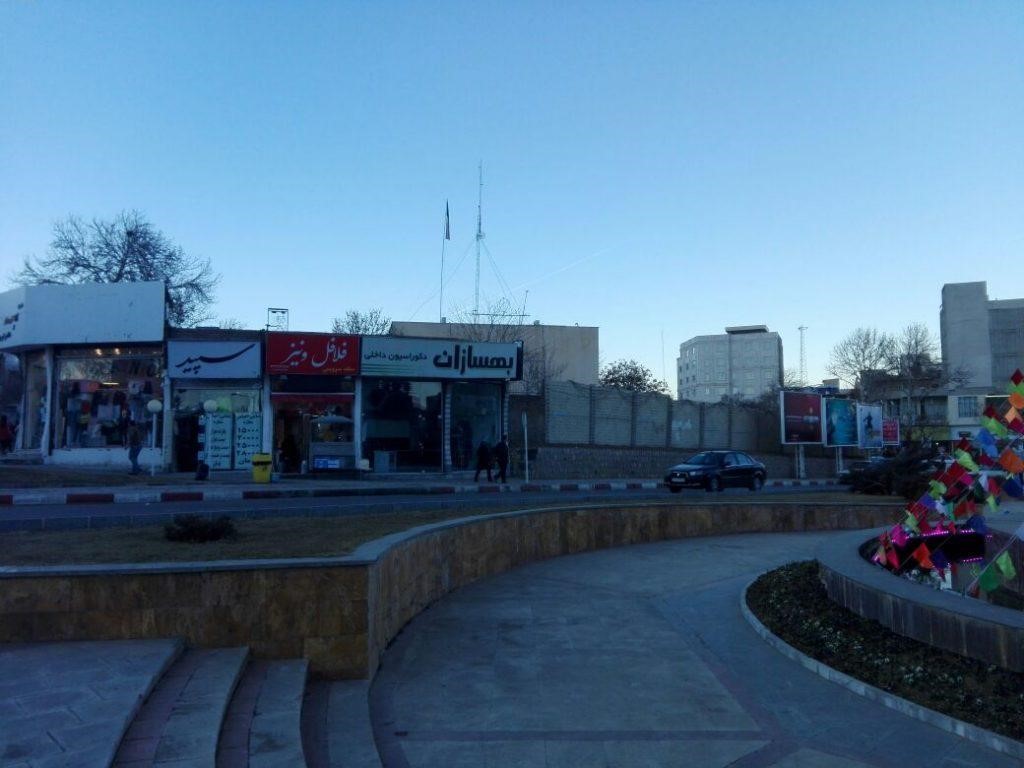 According to the locals, the mass grave was located where the black car is parked.

A former political prisoner, whose identity is being kept confidential by Justice for Iran for safety purposes, states:

‘The area was known as the Sharifabad-Sanandaj Crossroad. The location of the crossroad changed later, and a square was constructed on the road. The authorities integrated the prison visiting room into the city. There was a gate beside the visiting room, and at the other side there was a parking lot, whereunder executions were carried out. Until 1983, as long as I was there, it continued to be the place of executions.

In the 1980s, while they were constructing a street, workers found some human remains and stopped working. For a while, nobody was allowed to work there. Rumours circulated among workers, municipality employees and citizens that the remains belonged to the prisoners executed in the Revolutionary Court.’

Our researches have not yet uncovered what happened to the discovered bones and remains, and if they truly belonged to the prisoners executed in the early 1980s and during 1988 massacre.

Now, the mass grave site is part of the sidewalk in the square, one of the busiest places in Sanandaj and near several shops.

In preparing this article, Justice for Iran has used interviews with former political prisoners, locals and Kurd journalists, including Minoo Homily, Behrang Zandi, Azad Zamani, Faeq Masoudi and Mahmoud Hossein Panahi. The photos were sent by a local activist whose identity remains confidential for security reasons.