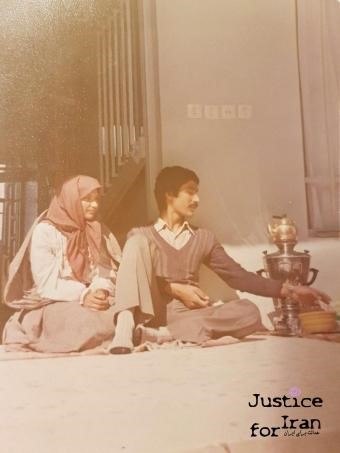 Mehdi was born on 9 December 1954. He got into the jail two times. The first was on 22 September 1981. Two months later, on 21 November, I and my one-year old daughter, Amineh, were arrested. He taught history, and I taught mathematics. He was sentenced to 3-year imprisonment but was kept in jail for 4 years until early 1985. I was imprisoned for two years. After getting out we started our life anew. We were both dismissed from school, so Mehdi found a new job in a company. My son was born on 4 June 1986. He was 11 days old when Mehdi was arrested for the second time on 15 June, because of talking on the telephone with a former political prisoner. It was a simple conversation for which Mehdi was sentenced to five years in prison. 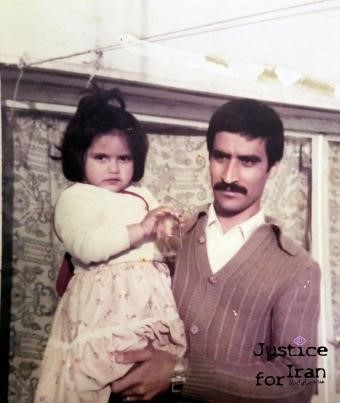 Mehdi was kept in the Vakilabad Prison of Mashhad until 1988. All prisoners were incommunicado in August. It was Thursday, 25 or 27 July of 1988, when the authorities informed families that their loved ones were incommunicado. Some agents referred us to the Islamic Revolutionary Guard Corps’ Office. From then on, we went to the IRGC’s and prosecutor’s offices every day, without anyone answering our inquiries. We heard from here and there that the prisoners were executed, but we couldn’t believe it.

There were prisoners who had ended their prison terms. The day we were informed about the visitation cancellation, a woman told me her son was due to be released on bail, on Saturday. Later it was found that he had been executed. Families didn’t know about the whereabouts of their loved ones. We went to different offices and departments to find a trace of our relatives. Finally, the officials from the Bojnurd Prosecutor’s Office called my father-in-law on 4 November 1988 to go there. They told him Mehdi had been executed two months earlier and wanted him to sign a commitment not to hold any memorial service, otherwise he and his other son would be in danger.

When we asked about his burial place, they replied, ‘We cannot tell you. It is somewhere in Behesht-e Reza cemetery of Mashhad.’ My father-in-law asked them to return Mehdi’s ring or watch, but they refused. The authorities neither revealed the burial locations of prisoners kept in Mashhad prison, nor returned their belongings to their families.

Mr. Saeidi’s two sons, Ali – a schoolboy– and Mohammd –a university student– were executed. He worked in the municipality and heard from his contacts that they were buried in Behesht-e Reza cemetery of Mashhad.

We went to Behesht-e Reza. At the end of the cemetery there was a section where the prisoners executed in 1983-84 were buried. They were shot by firing squad, and authorities delivered bodies to their families in return for a sum paid by them. Families placed headstones or planted flowers at their burial place, but after a while regime agent directed water over the site or set it on fire.

Behind that area there were two sections. One, which we called ‘behind the wall,’ was a large piece of land with a big bump appearing to be a mass grave. The other was called ‘the tower place,’ because there was a tower over there. The wall and the tower served as two signs for us. Executed prisoners were buried in mass graves. Massive amounts of dirt were piled up over a large piece of land. Families leveled out the ground and made individual grave for each victim. It was relieving for them to imagine their loved ones were buried in individual graves.

Every Friday, families went to the cemetery and put flowers on the graves marked by themselves as the burial place of their children. However, regime agents kept destroying the grave site. They cut the trees in the tower place’ under whose shade families sat in summer. They did whatever they could to prevent people from gathering there. Sometimes guards came there and yelled at families.

I have just heard from my family that the authorities are destroying Behesht-e Reza and the mass grave site.

After 29 years, my mother-in-law is still looking forward to her son. Whenever telephone rings she picks it up, expecting Mehdi’s voice. Whenever the doorbell rings she expects Mehdi behind the door. She has not believed his death. She says Mehdi is alive, otherwise officials would have returned his belongings to us.