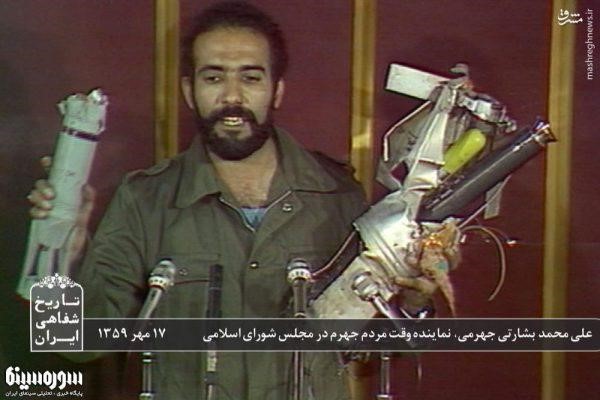 Ali Mohammad Besharati Jahromi was born in 1944 in Jahrom. He holds a PhD in international relations.

Ali Mohammad Besharati was a co-founder of Qanat group in Jahrom and involved in prosecution of dissidents in the early of the 1979 revolution. As a member of ‘torture allegations investigation task force’ in 1980, Besharati violated human rights by denying the practice of torture against political prisoners. While holding the position of minister of interior, the Ministry approved the ‘regulations for illegal clothing and make-up.’ As a result, Besharati is responsible for infringement on citizens’ personal and social freedom.

During the first months of 1981 and following repeated complaints and appeals by family members of political prisoners to the parliament representatives about torture and abuse of prisoners, Ayatollah Khomeini appointed a task force to investigate Tehran prisons. Besharati, then Jahrom’s representative to the Islamic parliament, represented the judiciary on this body. The body concluded:

‘The interrogation and investigation system in our courts and prisons are not based on torture, and if few cases have come to light, they are exceptions to the rule and a result of actions on the part of irresponsible individuals. Therefore, the accusations raised by one of the authorities regarding investigation and interrogation procedures are in no way accurate.’

The report was in direct contradiction to the testimonies of survivors and family members of victims.

In a report, ‘Torture in the Eighties,’ Amnesty International writes about common methods of torture in the early years of the revolution in Iran: ‘the most common methods of torture described to Amnesty International are whipping on all parts of the body with cables while the prisoner is suspended by the wrists, or strapped to a bed and the beating of the soles of the feet. Other methods reported include burning with cigarettes, burning with an iron, electric shocks, hosing with water, and mock executions.’

In the first months of the Islamic revolution, a group notoriously known as ‘Qanat’ were involved in torturing and murdering dissidents in Jahrom. Ali Mohammad Besharati was a co-founder and member of the group. In his book, An Introduction to the Killings of Dissidents in Iran, Masoud Noghrehkar writes about the formation of the group, ‘Hossein Ayatollahi, the Friday Prayer Leader of Jahrom, and Ali Mohammad Besharati (interior minister in Rafsanjani’s government) set out organizing criminal groups since January 1979. They founded ‘15th Khordad Group’ who proceeded to kill homosexuals. They poured acid to the face of a woman by the name of Golou and blinded her (the blind woman begging at the 6th Bahman Square in Jahrom is Golou). The Qanat Group reportedly killed tens of individuals in Jahrom in the interim of two weeks (21 June -4 July 1980), and disposed of their bodies into the qanats (aqueducts) around the city.’ Victims were mostly from religious minorities (the Baha’i), homosexuals and political dissidents (Mujahedin and other leftist groups.)

According to witness statements, the group continued with killing and oppression in Jahrom by the end of the summer of 1980. The testimonies of three local eye witnesses in an interview with Monireh Baradaran, published in Bidaran website, indicate Besharati’s involvement in these crimes. One of the witnesses stated: ‘Some months prior to the 1979 revolution, the oppression of dissidents and homosexuals commenced. Crackdowns were conducted by Hezbollah militia, under the control and command of Friday Prayer Leader of Jahrom and Ali Mohammad Besharati. The latter was Jahrom representative in the parliament, and later, the minister of interior in Rafsanjan’s cabinet. Before the revolution he had been arrested on charge of sympathizing with the Mujahedin. He changed his political affiliations at prison and became a proponent of the Islamic Coalition Party (Motalefeh Eslami). After getting out of prison in 1977, he returned to his hometown, Jahrom. From then on, he served as an advisor to the Friday Prayer Leader of Jahrom and promoted fanatical propaganda in the city. Ayatollahi and Besharati plotted killing the Mujahedin and communists and launched anti-communist campaigns. I recall when during the 1979 Kurdish rebellion 12 Basiji from Jahrom were killed, Besharati made a speech before the Friday Prayer Leader’s sermon. I heard it from Radio Jahrom. He said the communists had killed our children and referred to Ghassemlou the leader of Democratic Party of Iranian Kurdistan (who was later killed by the Islamic Regime, and the Fedaian gouged out his liver, cooked and ate it with wine.) In response to his words, people chanted ‘Down with Communists, Down with Hypocrites.’

‘Ayatolahi was Khomeini’s representative in Jahrom,’ another local eyewitness says to Monireh Baradaran. ‘In collaboration with Besharati he caused many atrocities. After 1963, pursuant to Khomeini’s criticism of the White Revolution and his exile, Ayatollahi joined Khomeini’s followers and started promoting his views. He was arrested several times by SAVAK but released shortly afterwards. They were not radical, and the Shah’s regime did not consider them a serious threat.’

About the formation and major members of the Qanat Group, the witnesses state: ‘The masterminds of the crimes were Ali Mohammad Besharati, Hossein Ayatollahi, Haj Mehraban, Parnian, … Before the revolution, they convened meetings against the Baha’i. At the time of the revolution they established the 15th Khordad terrorist group. The group’s name changed to Qanat in 1981. The members had set out some rules for the group. When they were about to kill or torture someone, they said the rules should be applied to enemies. By enemies, they meant dissidents, the Mujahedin, Fedaian guerrillas, homosexuals, and even those with whom they had personal hostility. They kidnapped people and took them out of the city, had them stood by a qanat and shot them or maimed them with knife and drill. Then they threw their bodies in qanats. Besharati wanted them to kill a donkey and dump it into qanat if they didn’t find anyone to kill for a moment. He didn’t like ferocity subside in them.’

In her witness statement to Justice for Iran, Solat, an eyewitness from Jahrom said: ‘Besharati was one of the perpetrators of the killings in Jahrom at that time. His niece was our prison mate. I can’t remember her family name. She spoke of her uncle and said he had been involved in the murder of Hamid Qafuri. Qafuri’s body when returned to his family was mutilated. They ordered his family to bury him in their house yard. She said her uncle was part of the Qanat Group who dumped victims into qanats…’

Mitra Lager is another ex-political activist in Jahrom. In a witness statement she made to Iran Human Rights Documentation Centre she said: ‘My cousin, Hamid, was killed by the Qanat Group in the early summer of 1981 when I was in jail. They had first stabbed him in the street, but people took him to the hospital, and he survived. However, after recovery and one day before his discharge, the armed Group rushed into the hospital. They raided all rooms, assaulted patients and shot one of them dead. They found my cousin, took drip needle out of his arm and jammed it into his eyes, then took him with his bed out of the hospital. In reaction to physicians who objected to them, they said, ‘You cannot object. We are Hezbollah, the army of God.’ Three days later, the gendarmerie found his body in an aqueduct out of the city. Marks of torture and cigarette burns were visible on his body. His limbs were mutilated. One of his eyes was gouged out and his back was stabbed.’

According to another witness, besides killing and torturing, there had been other repression methods such as dismissal from work: ‘In 1980 a screening committee was formed in Jahrom consisting of Ali Mohammad Besharati, Ebrahim Jamali, Atashi, Nasrollah Meymaneh, Haj Mehraban and the then commander of the IRGC of Jahrom. They distributed the published lists of dismissed employees in the city. No reason was specified for dismissals. If anybody questioned, they replied, ‘You know better what you have done.’ Most dismissals were from teachers.’

About Besharati’s function in Jahrom IRGC, one of the witnesses says: ‘Ali Mohammad Besharati and Hossein Ayatollahi founded committees consisting of Hezbollah militia in Gendarmerie and Shahrbani. While serving in Saltanat Abad committee, Besharati selected several religious youths from Jahrom and organized Jahrom IRGC. One of these members who later changed his political affiliation and turned Mojahed said that Besharati wanted them to kill all the Fedaian. Most leftist activists of Jahrom were sympathizers of Fedaian Guerrillas.’

In August 1996, while Besharati was holding the position of minister of interior, the Ministry approved the ‘Regulations for illegal clothing and make-up‘. It is a clear example of gender discrimination and limitation of personal and social freedom, all of which Besharati must be held accountable for. The article specifying the clothing banned from importing, manufacturing, distribution and selling reads: ‘clothing on which images of musical instruments such as guitar, violin, trumpet and harp are printed, embroidered, kneaded, attached, appliqued or stuck; clothing bearing funny and meaningless images such as a toe sticking out of a hole in a shoe, or image of addicted individuals; clothing bearing terms of endearment such as ‘I love you,’ ‘Kiss Me,’ and the like.’

Hossein Ayatollahi was Friday Prayer Leader of Jahrom who died in 2000. In addition to aforementioned witness statements, Esmat Vatandoust’s testimony at Iran Tribunal session (public tribunal held by the families of the 1980s Iranian victims) in London in June 2012 attests to his role in crimes committed in Jahrom. Her court testimony is available here.