No graves, no bodies 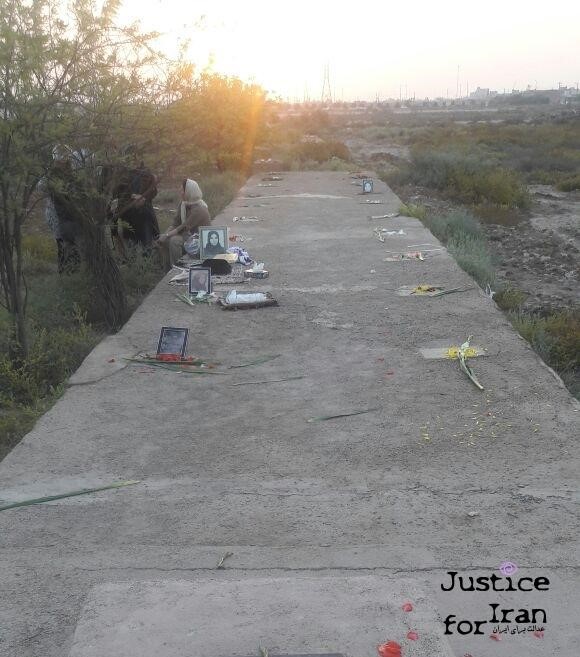 Shima Shahrabi, Iran Wire: “Our children were buried in mass graves. Their bodies were buried beside one another in a trench, and the trench was covered up with cement. Each family marked the grave of their loved one with a piece of marble on which their name was inscribed.”

Shima’s story is full of sobbing laments. The laments of a mother who lost her child during the 1980s executions and now is looking for a sign of him in a cemetery around Ahwaz.

Ahwaz’s mass graves are located on a barren piece of land, 3 kilometers east of Behesht Abad cemetery: “The barren land was previously a palm grove. Families came to Behesht Abad by their own cars through an abandoned dirt road. It was the burial place of prisoners executed in 1982-83. Later, the victims killed during the 1988 massacre were buried there.”

Shima Shahrabi recalls a memory she heard from a bereaved mother 29 years ago: “A mother who had lost her child in 1982 and came to the cemetery for visiting his grave realized a dug trench in July 1988. The trench is now the mass grave of our children. In her way back she saw a water cannon in the cemetery and agents throwing something in the trench. They were in distance, so she couldn’t recognize what they were doing. She found out later that her other child was buried there.”

This year, on Nowruz when families went to the cemetery, they found the graves of their loved ones being surrounded with construction debris: “a massive pile of dirt was over mass graves and formed a small hill. A construction project appeared to be under way. If the construction continues, some graves will be hidden from public access, and some others will be situated along the roadside and subject to destruction.”

In mid-May, a construction worker told the families who visited the site that the work under way to widen the road running alongside  the mass grave site would bring it very close to the site and the next phase of works would destroy the concrete-covered graves to clear the area for a green space or a commercial development. Families are getting worried. One of them says: “The authorities neither returned our loved ones’ bodies nor allowed us to hold memorial service for them. Now they intend to deprive us of these little delights of our life, some tiny stones and grave markers.”

Families have raised their concerns with human rights organizations. In a joint statement, Amnesty International and Justice for Iran warned against the destruction of these mass graves in Iran. Shadi Sadr, Justice for Iran’s Executive Director, states: “In recent years, the authorities have caused much chagrin and suffering to the families of the 1988 massacre victims. They have deprived them of their right to bury their loved ones and forced them to walk through piles of rubbish to visit their graves. Now they are going to destroy their burial places and wipe out their memories.”

The statement underlines that mass graves are crime scenes that require professional forensic expertise to undertake exhumations and ensure preservation of evidence and accurate identification of bodies. By taking steps to destroy the mass grave sites, the Iranian authorities are destroying vital forensic evidence that could one day be used to shed light on the number and identity of those killed by the regime.

“Instead of trying to erase the memory of those killed and obstruct justice, the Iranian authorities must ensure that the mass gravesites of the 1988 mass killings are preserved and protected until proper, independent investigations can be carried out. Families have the right to know what happened to their loved ones and bury them in dignity,” said Magdalena Mughrabi, Deputy Director for the Middle East and North Africa at Amnesty International.

The families of the 1988 massacre victims are under severe pressure from security forces. A family member says: “The authorities repeatedly intimidate us. They ask why we go to the graves of our loved ones and why we are in touch with those outside Iran. We can hardly publicize about the condition of graves. Please help us raise our concerns. These graves are very dear to us.”